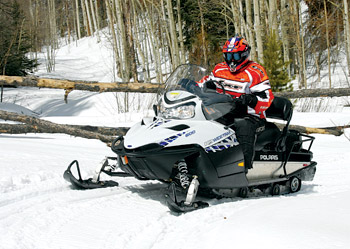 You could argue Polaris has lagged a bit in delivering Utility-Touring models that actually quicken the pulse. Last year the utility-targeted WideTrak took a giant leap ahead when the perennial workhorse was completely redesigned and fitted with a stretched and widened IQ chassis. Power was supplied by the 80 horsepower, non-turbocharged Weber 4-stroke twin used in some Polaris touring models. Way better, but not heart-pumping… yet.

This year, Polaris added one of its most exciting engines to the mix. The new 600 WideTrak, featuring the company’s venerable 600 Cleanfire 2-stroke twin, demonstrates the full potential of this category with a lighter, more powerful engine encased in a purpose built but very competent chassis.

Yeah, it may not be the logger’s choice for hauling timber out of the bush. Truth is, this sled leans very heavily toward being the ultimate touring sled much more than being a worker bee. It even looks like a touring sled with its cool graphics and paint and svelte cowl design.

Looking further underneath you’ll see the 600 WideTrak features the obligatory 156 x 20 x 1.25 inch track but, in this case, the slide rails do not offer the articulating feature seen on the Yamaha and Arctic Cat.

Instead, Polaris has gone the less complicated, lighter route and simply has tipped the rails at the rear so less track is on the snow in hard packed conditions. This makes steering a bit easier and still allows 100 percent traction in powder. Weight is further shaved off by using a conventional 2-shock skidframe.

It seems like the designers have prioritized weight in this sled’s design and it delivers a comfortable touring mass of 697 lbs., dry. This weight puts it right in the hunt with a lot of 4-stroke pure tourers not equipped with a sub transmission or the extra pounds of a wider track and skidframe. The end result is a nimble handling utility-tourer that really sells the whole concept of taking these sleds out on the trails and using them as 2-uppers.

When we rode the 600 WideTrak we were impressed with its nimble handling and premium ride. With about 80-lbs. less weight over the skis than a 4-stroke, it really carves corners and there was nowhere we could find any compromises with the way it turns.

Because Polaris has decided to simplify the design, the whole weight thing is enhanced and then, there’s the engine. This sweet, fuelie 2-stroke twin delivers a solid 125 ponies and its clutches spool the power down to the snow so nicely it feels like velvet. We’ve always said a strong, responsive engine makes a sled feel like it’s lighter. This is absolutely the case here.

Although you’re perched higher than when seated on a touring sled and the wider stance is felt between your knees, this is a roomy, comfortable sled for both passengers and the windshield affords good visibility and plenty of warmth.

One fault we noticed was absent rear passenger hand heaters. It’s about the only touring amenity left off the list and, by the time it hits the showrooms, Polaris may have already added it.