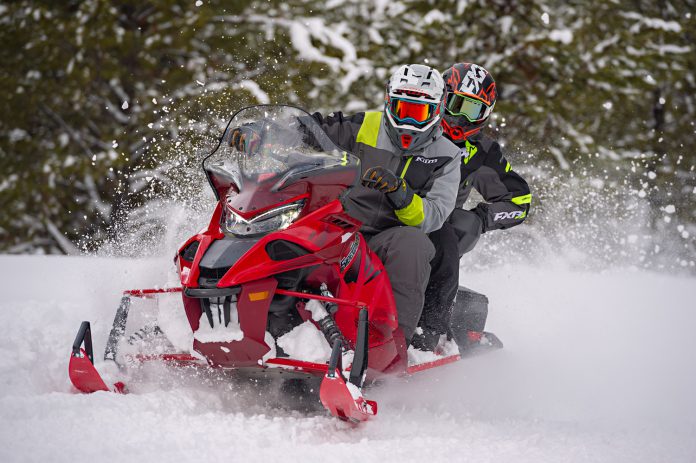 It was the early 1990s when snowmobiling decided it was time for an all-out, tailor-made dual passenger snowmobile to come to the market.

The earliest purpose-built 2-uppers were Arctic Cat’s Pantera and the Ski-Doo Grand Touring, based on the PRS “bull-nose” chassis. These sleds had unique features for that time – a backrest and a comfortable 2-passenger seat with handholds and footrests.

The idea was to give the long-distance passenger a nice place to sit where they had good vision without the fear of falling off the back should the driver suddenly forget someone else was “back there”.

As other OEMs rapidly got onboard, track dimensions became established at the 137 to 144-inch length and more amenities were added. 2-passenger-tuned suspensions, plusher, raised seats, more elaborate backrests and passenger hand warmers became the norm. Even storage space was upped and some models sported classy, well-engineered luggage equipment.

The last few years we’ve observed the manufacturers have started to put less focus on these 2-uppers and there are fewer pure touring models in the sales brochures than there have been in the past.

Yamaha and Ski-Doo lead the fray with the most 2-up selections, but Polaris and Cat (this year there are almost no 2-passenger touring-designated models from Cat) have vastly reduced the number of 2-place sleds they offer.

This trend is interesting because, in our observation, there are just as many riders as ever out there on the trails who are riding with spouses and children aboard.

Obviously, consumers are keeping these sleds longer and not visiting showrooms to shop for replacements enough to justify the OEMs investing in new technology. Perhaps the fact there’s been a big trend toward offering 4-strokes in these models may have caused consumers to get extra lifespan out of them so the necessity just isn’t there to buy a new one every couple of years. Dunno.

The result seems to be going in two directions.

First, there are a number of sleds being offered that have long tracks and excellent floatation that can be equipped with an accessory 2-up seat and other touring features. Although the sled is being marketed as a single passenger trail/boondocker, it can also be a good 2-upper.

The Indy Adventure is a good example of this type of sled, as is Yamaha’s SideWinder S-TX with a 146-inch track. Likewise, the Ski-Doo Renegade Enduro can be converted into a 2-upper taking advantage of its 137-inch track and air suspension.

As good as these sleds are, however, they do not fit the old profile of maximum comfort on long distance tours for the second passenger.

This brings the second trend into focus.

Quickly evolving snowmobiles like the Polaris Titan and Ski-Doo’s newly revamped Expedition SE and LE series are providing ultimate comfort for two riders and yet have really good handling, ride and performance for long distance touring.

Yes, these sleds were once utility stump-pullers but both Polaris and Ski-Doo have evolved them to the level they fit the touring category like a new pair of doe-skin FXR gloves. They even look really good with aggressive styling and cool paint and graphic treatments to amp up their sex appeal!

With 20-inch-wide tracks and an abundance of onboard storage, they are truly tempting tourers and are quickly overcoming the stigma that would make someone point and them and call them workhorses.

They just aren’t. They are premium 2-up snowmobiles that easily exceed the narrower, shorter 2-uppers we rode a decade ago.

Supertrax Onlinehttps://www.supertraxmag.com
Check back frequently for new content and follow us on social media!
Previous articleWILL THE 650 START A NEW CATEGORY?
Next articleSHOULD A SINGLE HANDLE BETTER THAN A TRIPLE?