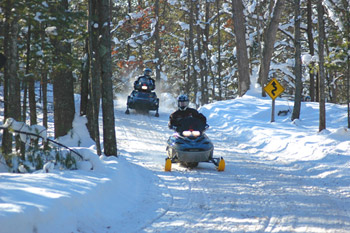 A DAY IN THE WOODS, A NIGHT IN THE WINE BAR

As president of the International Snowmobile Manufacturers Association, Ed Klim has experienced some of the world’s most exotic snowmobiling spots. So where is his favorite trail?

Not in Colorado or Montana, or even in Alaska. It’s Traverse City’s Boardman Valley Trail: an 80-mile network of scenic routes that wanders through thick green cedars and pines beside a snow-cradled river, skirts the edges of icebound lakes among wooded hills, and glides through stands of oak where deer run silently beside the pathway.

It’s not the fastest, most thrill-packed ride in the world, Klim admits. But it’s gentle and beautiful – and best of all, it’s just a few minutes from Traverse City, whose restaurants, galleries, casinos and resorts provide a welcome dose of luxury at the end of a day’s ride.

“I like the restaurants, because each one has its own personality, and I really like being able to indulge myself after I’ve been riding all day. I like to stay at a hotel with a nice hot tub, and I really enjoy stopping in at Mode’s Bum Steer for a nice big steak and a bottle of that great Traverse City Riesling.”

That’s snowmobiling “Traverse City style” – a blend of backwoods adventure, aesthetic appreciation and (let’s admit it) more than a bit of off-the-trail pampering. According to outfitter Jamie Bush, sledders come to this artsy community on the Lake Michigan shore precisely because they want to sample its winter amenities. Best known as a summer destination because of its sandy beaches, towering dunes and world-class golf courses, Traverse City is also becoming popular with winter visitors who like to sample its “Up North” lifestyle without giving up their big-city luxuries.

Those luxuries can include anything from Klim’s favorite hot tub-and-steak combination to an evening at the nearby Turtle Creek Casino, a dinner at the trendy Red Ginger restaurant or a show at Traverse City’s newly-restored 1891 City Opera House.

“There are people who come just because it’s Traverse City,” says Bush, whose rental company supplies snowmobiles to hundreds of individuals and groups each winter. “They love the town, they love the casinos and the shopping, and they love being here at the lakeshore, even when the lake is frozen. Besides, you can get some really good deals on rooms here in the winter.”

A few of those rooms are actually on the trail itself, at Ranch Rudolf, a real-life dude ranch deep in the heart of the Boardman Valley that’s a winter mecca for trail-riders. Some spend a night or two at the lodge, but most just drop by to spend an hour or two by the fireplace swapping tales about their day on the trail before heading into town to check out the nightlife.

“The best part of being in Traverse City is that when a family comes up for a winter trip, they don’t all have to be riding if they want to do something else,” says Ranch Rudolf owner Sid Hamill. “If they’d rather shop, go to the casino, or spend the day in a spa, they can do that. There’s really a little bit of something for everyone.”

Most of the lodging in Traverse City is spread out along the city’s two bayfront beach areas, where 60 hotels, motels and resorts provide almost 4,000 rooms ranging from the budget-conscious to the luxurious. That’s also where the majority of the town’s restaurants and night spots are – and it’s conveniently close to three of the five staging areas that feed into the trail system at Hoosier Valley, Rasho Road, and Supply Road.

Hoosier Valley, at the western end of the system, is a steep section of trail with more wide-open spaces that provide opportunities for faster riding. Supply Road is on the opposite end, in a remote section of high woods. Rasho Road, at the center of the trail network, is closest to the heart of Traverse City’s hotel/resort district; it can be easily reached by way of the popular High Lake Spur, a five-mile roller-coaster trail over a series of glacial hills.

Farther to the southeast is the village of Fife Lake, where the Boardman system links up with an even larger series of trails to the south and east by way of a snowmobile bridge over the Manistee River. The scenery is beautiful, with many turnoffs along the river and lookouts over the broad Manistee Valley.

Since the region’s scenery is so diverse, the trails encompass many different landscapes: snug tunnels of tall snowy evergreens, open stands of hardwood where the sun shines down through blue shadows, high ridges where eagles soar, wide meadows that look out over distant glacial lakes. Sledders accustomed to the wide-open raceway style conditions in other snowmobiling areas say they’re amazed at how often they seem to have the Traverse City trails to themselves.

“Folks who love off-trail riding have plenty of options, too, in the expansive Pere Marquette State Forest that’s home to much of the trail system,” wrote Wisconsin sledder Michael Carr in the November issue of American Snowmobiler magazine. “So when the snow comes again, point yourself and your snowmobile toward Grand Traverse County, where you’ll find that the riding is grand indeed!”

Not everyone who comes to ride the Boardman Valley trail system brings their own machine – particularly if they’re new to the sport. Fortunately, there are several local outfitters located near the trailheads to serve would-be trail riders with one- two- and three-passenger machines. One is Blue Sky Rentals (231) 633-2583 or www.bluesky-tvc.com.

STOPS ALONG THE TRAIL:

The amenities along the Boardman Valley trail system are just as diverse as the terrain. In addition to the lodge at Ranch Rudolf, with its fireplace lounge and dining room, another favorite stop for sledders is Peegeo’s, a pizzeria/bar at the end of the High Lake Spur. It’s a rare snowmobiler who doesn’t take a break at Peegeo’s for some refreshment and conversation. The menu is simple but tasty, from pizzas and subs to Mexican specialties, steaks and burgers

OTHER THINGS TO DO:

Traverse City’s 19th-century downtown provides a relaxed pedestrian-friendly atmosphere for shoppers, with more than 150 stores, galleries, restaurants and coffee shops, while the area’s many award-winning wineries are open for wine-tasting visits. For gaming enthusiasts, the Turtle Creek Casino in nearby Williamsburg is conveniently close to the Boardman Valley Trail. Other nightlife can be found year-round along the city’s East Bay hotel strip and at downtown bistros like Union Street Station and the Loading Dock, and there are shows almost every weekend at the 1891 City Opera House, the Interlochen Center for the Arts and Northwestern Michigan College’s Dennos Museum Center.

For more information about winter activities, lodging and dining in Traverse City, contact the Traverse City Convention & Visitors Bureau at 1-800-TRAVERSE or online at www.traversecity.com