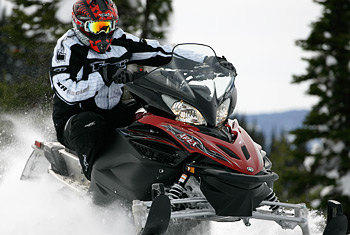 Yamaha innovated this feature first in the ATV business and it’s been a runaway success. In fact, every high volume ATV manufacturer, with the exception of Kawasaki, now offers EPS on at least one of its models.

With the advent of the 2011 Apex, we have to wonder if this feature will be as much of a success in the snowmobile world as it is in the off-road world.

There’s no question about it being a fabulous feature on the Apex. This is the best handling, most relaxing-to-ride Yamaha we’ve ever sampled and combined with its other engine improvements this year, is a downright joy to operate and to own.

Will the snowmobile competition get on the bandwagon soon? We think not, but there’s one big caveat. If owners of this new Yamaha with the EPS feature start raving about how much they love it and the consumer sway starts to communicate back that this is one feature they cannot live without, it will begin to show up on other brands.

As it is, all four snowmobile OEM’s already own exclusive EPS systems adapted from their ATVs they could easily begin adding to new models in the near future.

In the snowmobile universe, patent overriding is a huge factor and makes this a believable possibility.