Snowmobiling in the Eastern Townships 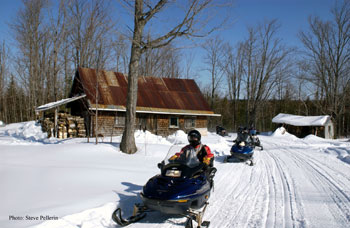 Nestled against the borders of Vermont, New Hampshire and Maine, are the Eastern Townships of Quebec. It’s a land of astonishing beauty – a kingdom of mountains, lakes, farms and picturesque villages.

His hometown, Valcourt, became the world snowmobile capital in 2004. At the At Valcourt’s J.-Armand Bombardier Museum visitors can appreciate the evolution of Bombardier’s research and visit the garage where his ideas first saw light.

Close to the museum, the Bombardier Recreational Products, where snowmobiles are still manufactured today, offers guided tours of the facilities.

The region has nearly 2000 km of trails maintained by 17 clubs. Nearby Valcourt, the most popular area is Megantic, the snowmobilers mecca with large quantities of snow and the charm of the wilderness.

In Sherbrooke, the regional capital, trails will bring the riders in the center of the city. The main trails connect with the Chaudière-Appalaches region, another snowmobilers paradise.

Every February, Valcourt hosts the annual Grand Prix Ski-Doo, a thrilling event where drivers with nerves of steel compete in track races and Snowcross competitions.

In 2009, the Grand Prix will be held from February 20th to 22nd. All the celebrations of the Ski-Doo anniversary will be held at the race track.

The Eastern Townships snowmobile trail map is the best tool to plan a journey. It contains all the information on lodging, restaurants, gas stations, rental retailers and much more. It can be ordered on our website (see Eastern Townships tab).

Fun is waiting for you. Start your trip today, visit www.bonjourquebec.com/snowmobile.