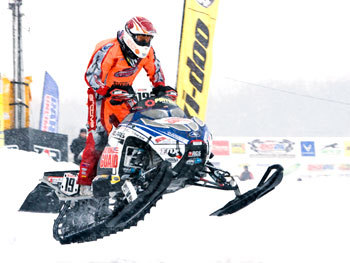 It was perhaps fitting that it was at Valcourt’s circuit Yvon Duhamel during the Grand Prix Ski-doo de Valcourt, that young Brett Bender (Polaris) championed his first pro victory of his career.

In a community known for its passion for snowmobile racing and at a venue rich with racing lore named after famed ice oval racer Yvon Duhamel, Bender scored his memorable victory where his father, world champion oval racer Tim Bender, also competed.

It was only a few weeks earlier in Brainerd, Minnesota that Bender found the podium for the first time in his fledgling pro career, finishing second behind snocross king Tucker Hibbert.

At the time it was one of the most emotional moments of his young racing career, but in hindsight it will pale in comparison to his AMSOIL Championship Snocross Series victory at Valcourt.

For much of the 20-lap final, it appeared Malinoski had the race well in hand, as he flawlessly negotiated the long and blazingly fast Valcourt track. But suddenly Malinoski fell of the pace, later to be attributed to engine woes. That opened the door for Bender, who had been running consistent and equally as fast lap times as, to overtake Malinoski and the lead on lap 15. It was a position he would not relinquish.

Malinoski managed to massage his wounded Ski-doo to a second place finish, holding off a charging Gulla, who now leads the year-end point battle in the premiere Pro Open class. “My engine was going down,” said Malinoski after the race. “I wasn’t sure I could hold on until the end, and I knew TJ was coming.”

Turn one was a sea of green when the Semi-Pro Super Stock field launched from the start line earlier in the day, as top qualifiers, Dan Ebert (Arctic Cat), Cory Davis (Arctic Cat) and Christian Salemark (Arctic Cat), all vied for the lead position as the field stampeded into the opening lap.

It was an image which played out twice during the Semi-Pro final, as a red flag forced a restart to the race after Mike Bauer (Polaris) and Tim Tremblay (Ski-doo) were involved in a opening lap tangle which saw Bauer unable to continue.

At the restart, the trio of Cats once again bolted to the front and this time it stuck. Meanwhile hometown favorite Tremblay suffered another get-off yet recovered albeit deep in the pack. At the checkered it was the Cat trio of Ebert, Davis and Salemark respectively, followed by crowd yellow faves Justin Broberg (Ski-doo) and Paul Bauerly (Ski-doo) completing the top-five.

“These fans here are crazy. They love their sport… I think I need to learn some French,” said an excited Ebert after the race. Ebert won the Semi-Pro open final in Valcourt a year ago.

Supertrax Onlinehttps://new.supertraxmag.com
Check back frequently for new content and follow us on social media!
Previous articleSo You Want to Be a Racer Girl?
Next articleSnowmobiling in the Eastern Townships