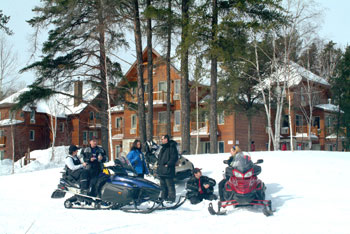 Lanaudière is considered a MUST for any snowmobile vacations and is conveniently located close to Montreal, Ontario and the northeastern states of New York, Vermont, New Hampshire and Maine.

Flanked in the south by the St. Lawrence River, Lanaudière region stretches up into the spectacular landscape of the Laurentian and Mauricie regions and is bordered in the north by the Laurentian Mountains.

The territory covers a total area of 5,227 square miles – a true winter paradise where snowmobilers can explore more than 1,400 miles of fantastic trails.

For 30 years the Lanaudière region has been renowned as the best place for snowmobile vacations and as a prime destination, among snowmobile enthusiasts worldwide.

The riding season often begins as early as mid-November, with plenty of snow through most of March.

The typical annual snow coverage in Lanaudière often exceeds 2 metres (over 6 feet) – even more in the north. The average January temperature is around 8° F. During that time, temperatures may range from about 20° F up to the freezing point.

Welcome in Lanaudière, the no.#1 snowmobile country! Fun is waiting for you.

Supertrax Onlinehttps://new.supertraxmag.com
Check back frequently for new content and follow us on social media!
Previous articleSupertrax RSS Feed Now Active
Next articleNEVER GIVE UP ON A SLED