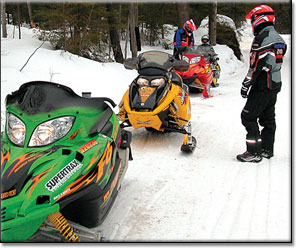 The Bemidji, Minnesota area is known as the home of Paul Bunyan. It’s also the home of some great snowmobile trails, and its ideal location means snowmobilers can go on saddlebag adventures to both northeast or northwest Minnesota.

Bemidji and its surrounding townships have a population of about 25,000 and there’s excellent food and lodging available at restaurants like The Peppercorn and hotels like the Hampton Inn on Lake Bemidji.

One way to begin a weekend of saddlebagging is to head northeast towards International Falls on the wide, powder filled ditches along highway 71.

In Hines, turn one block off the highway ditch to look at The Pioneer Store – a defunct business that could have been a prop for Little House On The Prairie.

Yes, those are Minnesota Elk antlers hanging on the front, from native herds that were extirpated around the turn of the 20th century before being re-introduced in the 1930s.

At Blackduck, pick up the Blue Ox trail. This trail is built on old railroad grade, making it easy to follow and International Falls is approximately a 100 mile run.

There are excellent full-service resorts on Rainy Lake as well as hotels and restaurants like Barney’s in “I-Falls”. From International Falls, take a pass through Voyageurs National Park.

On the Voyageur Trail System, you can enjoy runs across untrodden lakes and through pristine evergreen forests at this entry to Minnesota’s own Canadian Shield country.

From Mel’s, head south to Cook where there’s hot food and then west to the trail systems spanning the George Washington State Forest and the Chippewa National Forest. After enjoying the rolling hills and ancient pines in The Chippewa, it’s a relatively short ride back west to Bemidji.

If there’s still some petrol in your tank begging to be burned up, enjoy the well-groomed North Country trail system originating in Bemidji.

Some short local loops include the Movil Maze straight North of Bemidji, or take a day trip south to scenic Itasca State Park, where the Mississippi river begins.

Last, when in Bemidji, don’t forget to have your picture taken in front of the world-famous statues of Paul Bunyan and Babe, his blue ox!

Supertrax Onlinehttps://new.supertraxmag.com
Check back frequently for new content and follow us on social media!
Previous articleSpeaking of Value
Next articleRED ALERT FOR SNOWMOBILING