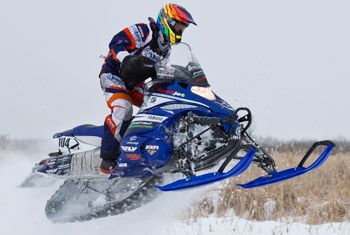 Altogether, the Nytro RTX racer won six Semi-Pro Improved events during the year – a personal record and also a record for the RTX.

Then over in Wyoming, the Yamaha Snowmobile Racing hillclimb team set another new benchmark as all six riders qualified on Friday for the finals before Ty Free and Chad Jorgensen raced to four separate top-five finishes – and another five top-10s along with their teammates – in Saturday’s finals aboard their Nytro MTX sleds.

These successes powerfully raise Yamaha’s status as the preeminent four-stroke performance snowmobile in the industry.

With some brutal-weather race weekends now behind them, the USXC competitors arriving at Minnesota’s big Lake of the Woods were happy to find relatively mild conditions there, although by the end of Friday’s testing the 10-mile lake-and-field course was sprouting enough bowls and ruts to resemble a snocross track.

Though Wadena and Muller eventually withdrew due to the rough conditions, Lindbom and Erdman powered on, racing furiously for position.

Hard charging by Lindbom and a quick spill for Erdman gave the teammates their well-earned 5-6 finishes at the checkers. As well, Kristy Schouviller added a top-five finished in the Pro Women’s class.

The toughest contest was definitely the afternoon 100-mile Semi-Pro Improved race. Here Lindbom simply annihilated the competition, building a massive lead on the rest of the field over 10 laps to score another convincing win.

The victory also proved a great confidence builder for the likable Yamaha rider as he moves from Semi-Pro to the Pro ranks next season. “This was longest Semi-Pro Improved race of the year, twice as long as any other race this season,” remarked Brian Strawsell, the Yamaha racing technical coordinator. “Two hours at race speeds over terrain this bumpy was a great endurance test for the riders – and a fantastic one for the sleds.”

The 8,500-foot elevation at the RMSHA hillclimb event in Wyoming proved equally challenging for sleds and drivers alike – as did a particularly fast and technical course that followed the contours of a ski run rather than a mountain face.

In all, the team contested nine different classes with six racers. Blue skies and pleasant temperatures greeted the teams and spectators on Saturday, setting up a memorable day for all.

“I am really happy with the results but not totally satisfied yet,” said hillclimb technical coordinator Troy Johnson. “I think that podiums are in our future and maybe even the first four-stroke win in RMSHA competition.” Yamaha Snowmobile Racing’s Eric Josephsen added, “I am really proud of all these guys. They have been training hard, improving their race setups in the shop, and then stepping it up on the track every weekend since the season started. But most impressive to me, every time they set a new benchmark they turn right around and beat it. Thanks guys!”

Catch the latest episodes of the Yamaha Racing show on the Yamaha Snowmobiles, USA YouTube channel and Facebook page.