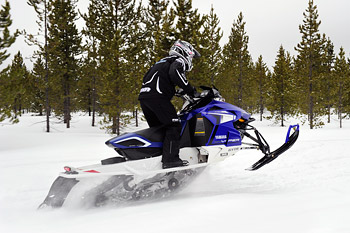 A couple of weeks ago Supertrax had the opportunity to ride all the new 2014 models in Montana. Just so you know, the elevation was about 6,600 feet above sea level, so some of our engine evaluations are tempered by the high altitude. However, we did get a good chance to check out suspensions, clutching and handling on the key new sleds you’ve been waiting to hear about. Over the next days we’ll be filling you in on our riding experiences with these new sleds…

By now you’ve likely heard enough stories about Yamaha and Arctic Cat sharing engines and chassis. Here’s our thinking on the motivation behind it and the potential result of this groundbreaking agreement.

Time to be honest. Yamaha had fallen behind in the tech-no-wars. Although the Apex was updated around 2010, it wasn’t a new product in a new segment, rather it was a freshening of an established design.

As a result of the worldwide recession hitting in late 2008, the company bolted the hatches in virtually all of its divisions except for increasing investment in the highly profitable low-tech scooter markets of the Far East.

When it’s all said and done, the Arctic Cat/Yamaha project bought four years of “catch-up” for Yamaha in its snowmobile division.

Here’s the good news: The ProCross chassis loves the Yamaha 1049 triple and the 1049 triple loves the Arctic Cat chassis. You don’t need much exposure to know the new Viper is already a winner and will improve Yamaha’s fortunes in the sno-mo-biz over the next twelve months.

The new Viper is everything we had hoped the 2008 Nytro would be. We’ve often lauded this engine as the best 4-stroke mill in the biz. We stand by that.

There’s no 130-135 horsepower 4-stroke delivering throttle response, torquey mid range and imposing top end as effectively as this motor. Yeah, we know Ski-Doo makes a 130-hp 4-stroke and so does Arctic Cat but this Yamaha triple is the benchmark.

Why is it so effective? Start with induction. It uses three (count ’em Doo talkers!) throttle bodies to deliver off-idle response that happens right now.

In fact the only thing you can compare the rat-ta-tat response of this 1049cc triple to is a 2-stroke. It’s that crisp.

The other issue with the 1049 is its three cylinders firing at 120 degrees. The triple cylinder configuration is just doggone right in the 130-hp class and this mill does it with 12 fewer pounds of metal than Cat’s Suzuki-built 1056cc twin. Go figure.

When you bolt this mill into the ProCross you get a superb handling snowmobile that’s stable on-center and nicely weighted in the turns.

The front end of the SR Viper turns-in precisely but is less edgy than a Ski-Doo XR. There’s a measure of forgiveness here that is confidence inspiring and holds clean bite to the apex.

Does this wide-spaced double A-arm front end understeer? If you charge the apex of a corner and carry a lot of throttle, only very slightly.

We sampled the Viper with different carbides and found dual carbides to be the most linear steering and dart-free on a wide variety of snow surfaces.

The 137-inch tracked SR Viper LTX impressed us most with its floating from arm, torque sensing link, torsion spring rear skid. This is a homerun model for Yamaha. We believe it will capture the bulk of sales.

We’d like to suggest Yamaha invest 12 cents in some stickers that indicate whether a Viper is using a 129 or a 137 inch skid. It’s difficult to tell what you’re looking at when you’re glancing.

More later on the newest, most intriguing snowmobile in the business for MY 2014.