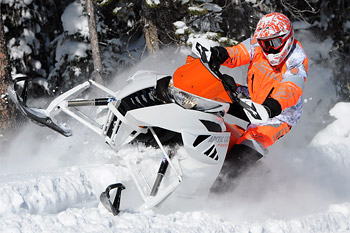 There are a few things I’ve done on snowmobiles that are indelibly etched on my mind. Here’s one of them:
In a rather whimsical way we accepted Jeff Devolin’s (Birch Point Cats in Ontario, Canada) offer to take our 2012 Arctic Cat ProCross 1100 Turbo and equip it with a bevy of his own aftermarket tweaks. The full story of how this rolled out is in the current issue of Supertrax Magazine.

Get this: Devolin’s successful Arctic Cat store repeats this incredible hop-up over 50 times a season. When Jeff is done with your Turbo-Cat, your VISA card is somewhat flatter but your Turbo’s powerband is a lot fatter.

Jeff is a purveyor of the excessive and one visit to his Bobcaygeon, Ontario dealership will prove how bent he is on exceeding. Blown, injected and otherwise heavily modified offshore boats litter the premises – each of them sweet enough to make any gearhead drool.

In the winter, a group of modified Turbo Cats is almost always sitting around the dealership.

At first glance, our modified ProCross Turbo could pass for any garden variety Turbo in any corner of the snowbelt. It’s totally stealthy, to the point of possessing a socially acceptable exhaust note, albeit somewhat more throaty than the stocker.

The only clue you’re dealing with a fire-breathing monster is a rather odd clear plastic pipe with a black cap protruding in front of the handlebars next to the instrument cluster. This is the fill tube for methyl hydrate, otherwise known as windshield washer anti-freeze or “bug juice”.

Yeah, methyl hydrate injection. This simple system precludes the need for 110-octane race fuel by controlling detonation, a real problem when stuffing copious volumes of air and fuel down the throat of a Suzuki 1100 4-stroke.

Inasmuch as our Turbo-Cat is stealthy in its drive-by appearance, this part of the story is the stuff of legend: I had anxiously awaited the return of our massaged Turbo and as soon as its carbides touched white top here at Supertrax World HQ, I suited up and jumped on the attractive white and orange missile.

Flicking the key effortlessly lights the fire. Throttle response feels good, but not scary. I rolled out of the shop and down onto the lake.

Looking for a good spot to whack the loud handle I noticed how linear and civilized the Turbo responds to its throttle.

I naively assumed this sled would be merely impressive. Lets say that was among the most serious miscalculations I’ve ever made.