YAMAHA GETS READY TO RACE 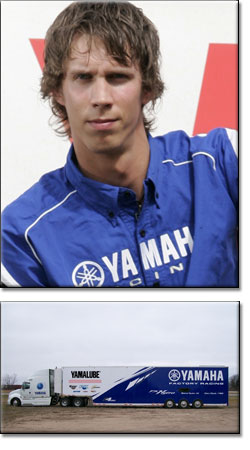 The Yamaha Factory Snocross team is putting the last touches on its fleet of ferocious 4-stroke race sleds in preparation for the season-opening WPSA National in Duluth, Minnesota this weekend.

“We’ve been up in extreme northern Manitoba for the past week and our crew is very pleased with the sled’s final pre-race workout,” said Yamaha Race Manager Greg Marier. “Pro racer Steve Taylor is in the best shape of his life and is determined to put himself on the podium early and often this season.”

The original Factory Snocross plan called for Cory Davis to race in the Semi-Pro Open class this season. “But we had a hiccup to the plan,” said Marier. “Cory had a mishap on a practice lap and hairline fractured his collarbone. He will have to sit out the first national event, but he will be back on his modified FX Nytro race sled in time for the second stop, the double header at Canterbury in Minnesota.”

“We’re excited to have Johan available to come to the US and compete in Cory’s stead,” Marier said. “He is a tough competitor who has been racing for 13 years.”

When race fans come to any WPSA National event, they can stop by the new Yamaha Racing Communications Center (YRCC) to have their picture taken on an actual Factory FX Nytro Race sled with the fabulously beautiful Yamaha Snocross girls.

Snowmobilers can also find out about the FX Nytro demo rides being held in conjunction with the weekend’s races at YRCC.