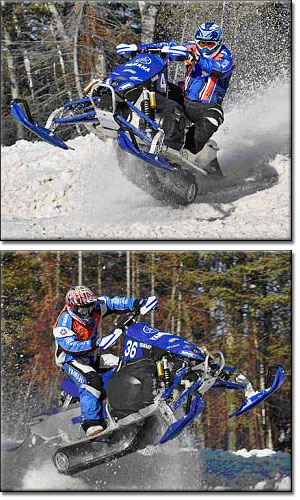 Yamaha/Boss Racing snowmobile drivers Robbie Malinoski and Yuji Nakazawa debuted their four-stroke Nytros to the at the first snocross event of the 2006-07 season in Duluth, Minn. on Nov. 25-26.

Aboard Yamaha Factory R&D Nytros, both riders had their sights set on being the first to put a four-stroke machine in a WPSA Pro final. An additional goal for Nakazawa was to qualify for Winter X Games 11 to be held in Aspen, CO. in January.

With winter yet to arrive in Minnesota, the MX-style snocross track featured manmade snow but plenty of excitement.

Malinoski suffered an unfortunate crash during a crowded practice session on Saturday and his crew rallied to get the damaged Nytro back into racing shape. He then gallantly fought through four qualifying races in an effort to make the final.

Though he narrowly missed the cut Malinoski will have another chance at the next WPSA event on Dec. 16-17 in Gaylord, Mich.

On Sunday, Nakazawa, the defending All-Japan Super Class champion, earned a second and two thirds on his way to the X Games qualifier.

With only the top five finishers earning spots in the January 25th-28th X Games, there was plenty of pressure on the 15 riders in the final, and despite riding a great race Nakazawa managed only a seventh-place finish.

Fortunately, he too will have another opportunity as the series heads to Michigan.