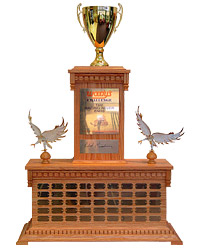 In the past International Engineering has received numerous requests from both summer and winter race organizations to host the Woody’s Challenge. This year it was decided to break with tradition and allow all those with interest to compete for the opportunity.

“We have numerous criteria to consider when deciding where to hold the Woody’s Challenge. Among them are timing of the event and regional marketing plans,” said Robert Musselman, President of IEM.

“Over ten proposals were received at International Engineering requesting the opportunity to hold the Woody’s Challenge. The first decision was easy, for this year the Woody’s Challenge would remain in grass drags,” Tanya Leonard, Marketing Coordinator explained. “The remaining decisions took a great deal of discussion since we have worked with all the Race Associations applying and they all have a lot to offer.”

It came down to the timing of the event being crucial to the marketing plan. It is for this reason IEM chose to hold the 2005 Woody’s Challenge at Seneca Falls Supertrack, Seneca Falls, New York on October 15, 2005.

Tony Pettinelli, President of Powersled Racing Organization said, “The timing is great for racers all over the midwest to come to Seneca Falls, New York, October 15 and 16, 2005. The track is fast and you will see some real fast times.”

Molly Kirschner, promoter of the Seneca Falls Supertrack said, “We have made many improvements in upgrading our facility, including building a new laser leveled track with over 1000 feet of shut down.”

IEM will work closely with both organizations for this to be the most memorable Woody’s Challenge. Additional information is available on Woody’s website.

Supertrax Onlinehttps://www.supertraxmag.com
Check back frequently for new content and follow us on social media!
Previous articleExhaust Coating for 4-strokes
Next articleNew market for AD Boivin