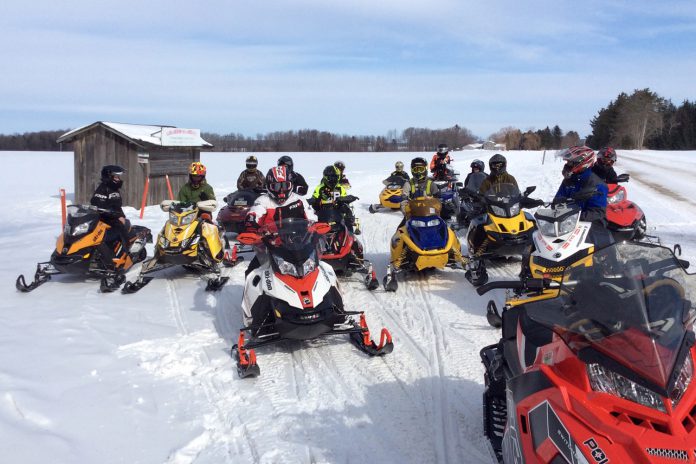 As most students were on the way to school today, 12 sledders from Eastview Secondary School, along with two of their teachers and two community volunteers, were meeting in their outdoor classroom along the OFSC trail B112B in Oro-Medonte, Ontario, Canada. This was the inaugural trail ride for the Wildcat Sled Club.

Student requests, a shared love of snowmobiling and a desire to reinforce safe sledding, led teachers Jason Beer and Marianna Rallis to work hard to make this club a reality.

The journey started just over a year ago with a proposal to the Simcoe County District School Board. Despite the fact that there were no clubs of this kind in province of Ontario, Principal Jane Seymour, Corporate Risk Officer Erin Schwarz and the Superintendents and Director of the Board gave the club a green light.

After a thorough safety meeting held at the school and conducted by the OPP, the dates were set and sledders prayed for snow. While the OFSC trail groomers worked hard to open the trails, other community partners such as Royal Distributing, St. Onge Recreation, St. John Ambulance and the Sno Voyageurs reached out to the Wildcats and offered tremendous support by way of donations.

Unfortunately January’s lengthy thaw saw the first trail ride cancelled. However, the snow returned and the trails reopened with near perfect conditions.

As the 16 sledders departed they toured along the B112B trail to Hawkestone and headed north along trails 203, B and B205C to Waubaushene where they stopped for lunch. After fueling up they continued north and west along trails C and 309 ending up just north of Elmvale.

From there the club headed south along the C, B and B103 trails to the SCDSB office in Midhurst where they thanked Erin Swartz and took at picture with her and Mayor Harry Hughes of Oro-Medonte, a long time educator and major supporter of community sport and recreation. Afterward, the sledders toured back to their original meeting place in Shanty Bay.

Overall, the first outing was a great success and we look forward to more riding in the near future, weather permitting. The Wildcats would like to extend a huge thank you to everyone who made this club a reality.

Supertrax Onlinehttps://www.supertraxmag.com
Check back frequently for new content and follow us on social media!
Previous article2019 POLARIS INDY EVO
Next articleHOW MUCH WILL ARCTIC CAT CHANGE?