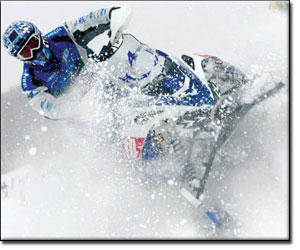 On Feburary 3, the second round of the 2008 All-Japan Snowmobile Championships was held at a special course set up at the Snowmobile Land in Madarao (Nagano Pref.).

In heat one there was a stunning display of the awesome power of the Yamaha FX Nytro as Daishi Takamura took the holeshot, followed by two more FX Nytro riders, Nobuaki Eikura and Shinji Tozawa, into the first turn. Through the early stages of the race these three Yamaha riders battled in the lead, with Takamura able to stay in front of Eikura and Tozawa.

The battle for 3rd raged between Tozawa and Yohei Kubota (S) until the final lap of the race, where Kubota managed to slip past Tozawa to grab 3rd and resign him to 4th.

After leading the race in the early stages, Takamura was able to hang on and finish in the points with a 5th. He was followed in 6th by another Yamaha rider, Kiyotaka Kawagoe, who had come through the first lap in 4th position.

Recovering from his fall, Eikura was able to finish 7th. Meanwhile, Masafumi Terasaki moved up to an 8th-place finish after starting in 11th position.

In the second heat Tozawa got the holeshot, followed into the first turn by Matsuda, Tersaki and Masaki Sasaki (S). In the early laps, Tozawa ran at a strongly pace in the lead, but Matsuda was on his tail.

Meanwhile, Terasaki battled in 3rd position with Sasaki until lap four, when Sasaki slipped past him and raced on to close the gap with Tozawa and Matsuda in the lead, leaving Terasaki in 4th position. The race then developed into a 3- man battle for the lead. Eventually it was Matsuda who again emerged the winner, after passing Tozawa on the 11th lap and racing on to the checkered.

The ensuing battle between Tozawa and Sasaki lasted until Tozawa’s pace began to slow and Sasaki went past him and went on to finish 2nd to Tozawa’s 3rd.

After falling to 4th, Terasaki was able to hold that position to the finish. As for Takamura, who had been forced to start from the very tail of the pack, he managed to maintain a steady, fast pace and work up to 10th position by the finish.

And Kawagoe, who had come through the early stages of the race in 8th position, took a fall and finished 12th. Meanwhile, Eikura also took a fall in mid-race that resulted in machine trouble and kept him from doing any better than 13th place.

On the day, the overall winner was Matsuda, with Hashiba 2nd and Tozawa taking 3rd, having placed 4th and 3rd in the two heats. This put Tozawa on the winners’ podium for the first time this season.

Supertrax Onlinehttps://www.supertraxmag.com
Check back frequently for new content and follow us on social media!
Previous articleF1000 Pushing
Next articleAbitibi-Temiscamingue: My Piece of Heaven