Abitibi-Temiscamingue: My Piece of Heaven 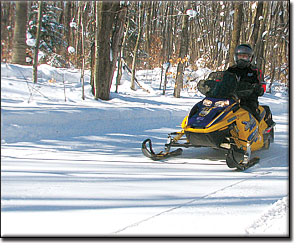 Located in Northwestern Quebec and approximately a 6-hour drive from the US states bordering Ontario and Quebec, snowmobiling on the trails in Abitibi-Temiscamingue is without a doubt one of my absolute favorite activities.

I’m not exaggerating when I say this is one of the premier riding destinations in North America – especially for the avid snowmobile tourer. There are over 2200 miles (3700 km) of magnificently groomed trails here and the winter weather comes early.

The long season allows clubs and volunteers to build a trail system before the traffic arrives and keep trails in place longer. Even on the tail end of the season I’ve experienced some awesome riding in late March and often in early April.

Maybe the biggest advantage of riding in Abitibi-Temiscamingue is its general lack of snowmobile traffic. The region is so large you can ride for miles and never see another snowmobile. The truth is, this trail system is so vast it can handle sled volume without seeming busy.

There are a 11 clubs in the region and the volunteers take trail grooming seriously. This passionate and dedicated group continually proves its mettle with the quality of the trails.

Many visitors begin riding from the city of Temiscamingue, which the southern entrance to this region. Starting a ride out of Temiscamingue on Trans-Quebec Trail 63 is flat-out awesome! We’re talking about a rail bed based trail here and frankly I have yet to see it less than stellar.

At Ville-Marie you’ll have decide whether to go north on Trail 83 or east on Trail 63. It doesn’t really matter because both routes are more than good. I usually stay on 63 because it takes you to Trail 309, commonly called “Rapide-Sept” (translation: Rapid Seven) and I guarantee that upon your arrival in Val d’Or, you’ll have had one of the finest days of riding you’ve ever experienced.

Supertrax Onlinehttps://new.supertraxmag.com
Check back frequently for new content and follow us on social media!
Previous articleTozawa Gets First Podium Finish of Season
Next articleBIG SHOT STUDS