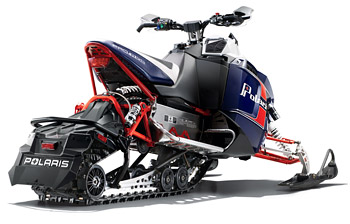 Next year the RUSH chassis goes mainstream in the Polaris line-up and the basic RUSH platform will come in two power flavors: The current 4-injector Cleanfire 600 twin and a much awaited 800 Liberty Cleanfire, using for the first time, just two injectors. These engines are available in the RUSH chassis in a couple of very appealing variants.

For MY11, the basic RUSH package comes with non-reservoir coilover Fox HPG shocks up front and in the skid. A base RUSH can be fitted with electric start at the dealer.

This RUSH trim level nets a top speed enhancing 15x120x1-inch track. Interesting updates to the Pro-Ride suspension and its associated packaging have a profound effect on how the sled looks.

The big news is the addition of a tail cooler mounted under the new rear suspension garnish. This rear cooler was necessary for the 800 engine but will be standard on all RUSH 600 variants as well.

Notice how the new rear trim and the revised Pro-Ride system makes the RUSH look longer and the seat less isolated and less like a bar stool. Overall, the visual effect of the RUSH is exponentially improved across the board. The 600 comes in black only and the 800 looks sweet in red.

Big news comes in the form of a new rail bend and a modified front arm. Both these changes have added what some insiders have suggested is a 5-mph increase in top speed down the lake.

The other advantage is better stud clearance. The Pro Ride rear cantilever arm has been completely redesigned along with the garnishes covering the articulating rear suspension structure.

This change nets a substantial improvement in the visual persona of the sled and we like the overall improvement. So dramatic are the changes to Pro Ride this year we compared them to the updates Ski-Doo landed after the original 2003 beaver-tail REV underwent major rethinking when the 2004 flat-tail arrived.