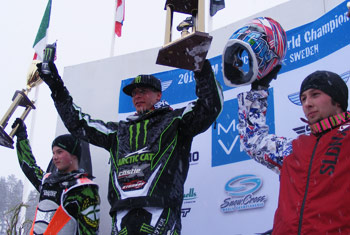 World Domination in Snocross and Hillclimb

If there was any doubt about which snowmobile was the world’s best, Team Arctic snocross and hillclimb racers answered by winning a combined 10 World Championship titles and taking 29 podium positions.

On this side of the pond, Team Arctic hillclimbers applied their skill with the incredible climbing ability of the M Series snowmobiles to win nine classes at the Jackson Hole (Wyoming) World Championships, including two King of the Mountain titles.

Highlighting Arctic Cat’s strength in all engine categories, Team Arctic racers scored wins in the 600, 700, 800 and Open classes to once again confirm that M Series Mountain sleds are best-in-class.

“Winning 10 World Championship titles in a single weekend is a huge accomplishment for Team Arctic,” said Mike Kloety, race manager. “Sweeping the podium in Sweden put an exclamation mark on another winning season of snocross. Taking nine hillclimb World Championship titles across the full spectrum of classes confirms the strength of our racers and crews, the hard work of Al Shimpa our hillclimb coordinator, and the performance of our machines.”

About Arctic Cat – Arctic Cat Inc., based in Thief River Falls, Minn., designs, engineers, manufactures and markets all-terrain vehicles (ATVs) and snowmobiles under the Arctic Cat brand name, as well as related parts, garments and accessories. Its common stock is traded on the NASDAQ National Market under the ticker symbol “ACAT.” More information about Arctic Cat and its products is available on the Internet at www.arcticcat.com.