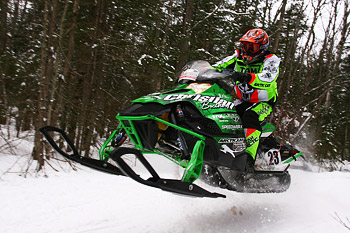 From top-to-bottom and everywhere in between, Team Arctic racers, crew and Sno Pro race sleds left no doubt about which brand owns the rugged terrain that defines cross-country competition. The championship points tell the story:

Arctic Cat engineer/racer Brian Dick led a top-four sweep (and seven of the top-10) of the Pro 600 points, while his teammate D.J. Ekre took his second consecutive Pro Open championship. Team Arctic notched seven of the top-10 in Semi Pro 600, the top-12 positions in Expert 85, the top-25 in Sport 85 and the top-19 in Junior class points.

“I’ve had the fortune of witnessing Team Arctic dominate cross-country for nearly two decades, but I’ve never seen anything like this season,” said Mike Kloety, Team Arctic Race Manager. “On behalf of everyone at Arctic Cat, I’d like to congratulate everyone who raced on our team this season, with a special nod to the 14 class champions.”