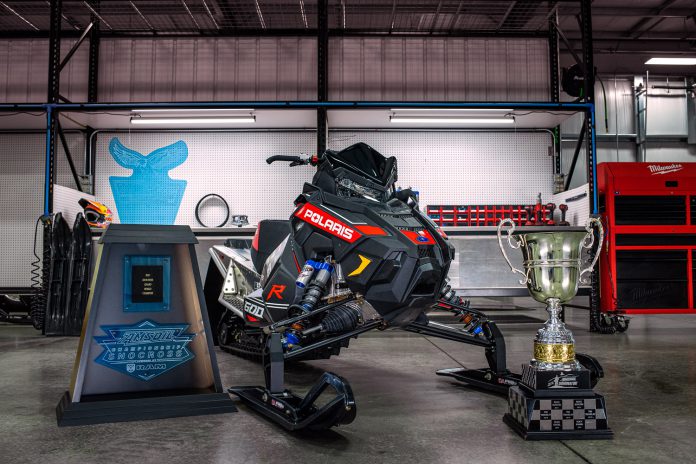 Success and Development in the 2020-2021 Race Season Team Polaris descended upon racetracks across the snowbelt last winter, outfitted with the best of the best built in Roseau, Minnesota.

The pandemic cut short the 2020 season, and Team Polaris racers were eager to hit the track as soon as the snow flew. Armed with new engines and technologies, Team Polaris stood proudly on the podium from Jackson Hole to ERX and Eagle River.

“Last season was a fantastic winter for Polaris. We won and had great success in every venue of snowmobile racing, with great momentum coming into this winter.” said Tom Rager Jr., Polaris Racing Manager.

The headline of the fall was the all-new 600 race engine, purpose built for the AXYS 600R SnoCross race sled. Redesigned from the ground up, the 600 twin featured an all-new throttle body EFI system, new combustion chamber, ports, and lightweight crankshaft and flywheel.

The result was a 10-horsepower gain at peak RPM, and an 18-horsepower gain in the midrange. In addition to the massive power jump, the immediate response of the engine was dramatically improved. “The racer were looking for more power, both in the holeshot and top end for longer sections of the track. The new 600 race engine really delivers that, through a lightweight, low inertia rotating assembly and an all-new EFI system.” said Darren Hedlund, Powertrain Development Specialist. The result was a true step-change in performance all the way around the track, from the hole shots to tight corners and big triples.

Team Polaris SnoCross racers had a solid start to the season, with Adam Peterson taking the opening round of Pro Lite at ERX. The opening few rounds of the season saw some early success aboard the new engine, as well as working out some year one challenges. The season finished strong, with Polaris Racers Oskar Norum and Kyle Pallin teaming up to win 3 of the final 6 Pro Finals. Polaris dominated the Pro Lite class from the first green flag drop to the final checkered, with Adam Peterson of LaVallee Racing taking the season championship, and Travis Kern of Cottew Motorsports and Carson Alread of Judnick Motorsports finishing second and third. “Adam and Travis have shown they have the speed and consistency to be in the mix in the Pro Class, and we expect them to make an immediate impact” added Rager, Jr.

The Hillclimb team took on the RMSHA circuit, picking up right where they left off last season. While the 2020 season was cut short at only 3 races, Team Polaris won all 9 King titles, sweeping every single race. “With the 2020 season being mostly cancelled, I was coming into the 2021 season with a full head of steam ready to win.” commented Keith Curtis, Polaris Racer. Expectations were high heading into the 2021 season.

The season kicked off at the Bear Lake Hillclimb with Keith Curtis sweeping every class he entered, taking home all three King titles – and eliminating any notion that the Polaris RMKs had lost a step. The domination continued with the team coming into the Jackson Hole Hillclimb on a roll. The crew delivered a knockout performance in Jackson, winning 11 of 12 Pro classes and all three King Titles.

The season wrapped up at the Lost Trail Hillclimb in Sula, Montana, and the results are simply unreal: Polaris racers won 8 Pro classes, and Keith Curtis, Luke Rainey, and Justin Thomas combined to win all 18 King titles this season. Kept under wraps throughout the race season was some exciting news: Curtis and Thomas swept the Mod King titles aboard factory-built, near production Patriot Boost engines.

The Cross-Country season was shortened due to pandemic restrictions, only running four races this season, all on frozen lakes with Ice LeMans style racing. Justin Tate took home the Pro win in round three, and Taylor Bunke and Justin Tate finished the season in 2 and 3 respectively in the Pro Championship points. “The 600 Cross Country was built specifically for hard charging cross-country racing, and our racers are really excited. We’re confident there will be a step change in performance this winter with the new sled” commented Rager, Jr. After taking the top 11 finishing positions at the 2020 SOO I-500, the 2021 race was cancelled due to the pandemic. The team will be back in action this winter in Michigan to take on the challenging 500-mile oval race with high expectations.

Blaine Stephenson has been the man to beat at the legendary Eagle River Ice Oval in recent years, going into the 2021 race with a record three World Championships in a row. The race was a wild one, and Blaine was able to prevail for a record 4 consecutive World Championship on his Champ 440 Polaris. Expectations are high heading into the race season, and the engineering team in Roseau, Minnesota has made sure that Team Polaris is equipped with the best to fight for podiums. From the continuous improvement of the 600R to the all-new Matryx Indy Cross Country and new Hillclimb engines, Team Polaris is coming out swinging this winter.

The 600R SnoCross race sled’s new race engine last year was focused on delivering more power all around the track and did just that with nearly 18 more hp in the midrange. For the 2022 600R, the engine features a variety of updates, tweaks, and improvements to improve response and durability. Updated porting, exhaust valves, and an improved ECU deliver better performance and faster response around the racetrack.

At nearly every track on the circuit, the hole shot is a crucial part of the race. While you certainly can’t win the race in the first corner, being in the front sure doesn’t hurt. To make sure the red sleds are into Turn 1 in the lead, the engineering team built an all-new rear suspension hole shot device. The mechanism holds the suspension in the optimum, compressed position for launches, then disengages and allows for full travel once the first bump is hit. The result is more consistent, immediate launches. “Being at the front in turn 1 is a huge advantage in SnoCross racing, and the 600R’s new holeshot device will give us an edge” said Ben Hayes, Racing Development Specialist. “The new suspension device will give our racers better holeshots in every class.”

After 6 seasons aboard the AXYS platform, the Cross-Country team will be piloting the all-new 600 INDY Cross Country, a factory-built race sled on the all-new Matryx platform. The Cross-Country features components and designs proven on the toughest tracks, with a heavy-duty 136” Pro-CC rear suspension, race ready bracing, PRT brakes, venting and more.

The 600 Cleanfire engine features exclusive lightweight flywheel and cup, lightweight rotating assembly, and more aggressive engine calibration. From the ditches of Minnesota to the legendary Alaskan Iron Dog, the race-team exclusive 600 Cross Country is ready. “The new Matryx platform is going to be a big upgrade on the track, with how easy it is to move around the sled” said Alex Hetteen, Polaris Racer and Powertrain Engineer. Following the exciting launch of the all-new Matryx RMK in March, the Polaris Hillclimb team is excited to send the new RMKs through the gates. “I’m super excited to get the new Matryx Slash out on the track. After seeing what it can do in the backcountry, and how precise and responsive it is, I know it will be extremely competitive on the race course” added Curtis.

The RMK Khaos Matryx Slash will challenge the 900 and 1000, with the 650 Pro RMK Matryx in the 700 class. The lightweight, rigid design of the Matryx platform RMKs are ideal stock class Hillclimb sleds, and excellent foundations for the factory-built Modified class sleds. The standard Walker Evans Velocity shocks, Polaris-exclusive tracks, and Patriot powerplants deliver the power and control required for the brutal Hillclimb courses that are commonplace on the circuit.

Beyond the new platform are two new engine packages for the season. The first is a factory-built 650 mod, built for the 700 Improved class. The engine features a revised head and calibration, as well as purpose built twin pipes, designed in Roseau, MN by the engineering team. The second is a production stock Patriot Boost engine package to compete in the new Stock Turbo class. After taking all 7 Mod King titles last season, the Patriot Boost engine is ready to defend its reign from any challengers.

No matter the venue, race circuit, or conditions, Team Polaris is ready to race when the snow flies, with the best equipment, ridden by the best racers in the business.