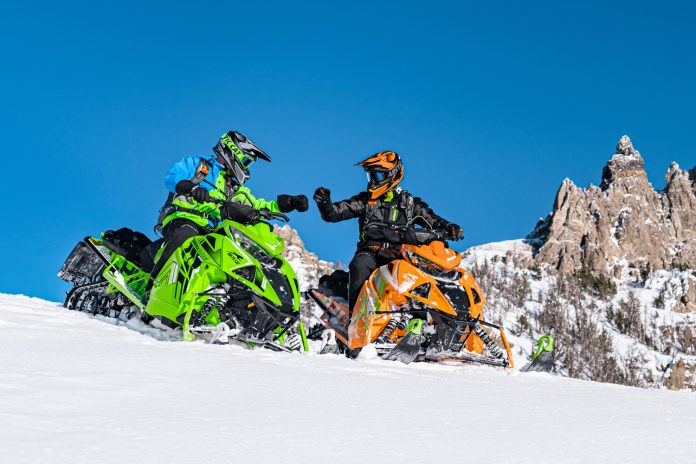 Textron has been massaging the management structure at Arctic Cat in a pretty serious way this spring and early summer. You’ll see as you read this report that Textron is both integrating members of their team and empowering other long-time Arctic Cat leaders.

Heidi is a university graduate with an Engineering degree, which leads us to believe she will be hands on with both snow and dirt products. In fact, McNary is a self-professing “question asker” who is always after solutions – whether they be mechanical or more marketing oriented.

McNary comes from a VP role at Textron Aviation. Her new role at Arctic Cat obviously requires her to be in Thief River Falls on a full time basis. She is joined in moving to TRF by her son and husband. Fortunately, the entire McNary family are avid outdoor enthusiasts. Look for some interesting improvements to come to both Arctic Cat sleds and Arctic Cat off road vehicles in the future.

Troy is not a newcomer to Arctic Cat. It has been our privilege to have worked with Troy for more than 20 years. In that time we have come to respect Troy’s insight and understanding of Arctic Cat snowmobiles. Troy’s new role pretty much puts him in charge of what we’re going to see in both the immediate and long-term future of Arctic Cat. Troy is genuinely excited to take the reins of Arctic Cat snowmobile product development. In his words: “I have the greatest job in the whole wide world”.

Something New In The Works?

We had the opportunity to engage in a brief discussion with these two AC leaders in late June and, although no specific timing was indicated, there is likely something significant in the works in terms of a new snowmobile platform. Regular followers of SnowTrax and Supertrax know we’ve been adamant that the current Pro Cross chassis is in need of new, long front torque arm, rear skid.

We took the opportunity to ask about plans for electrification of an Arctic Cat snowmobile. Halvorson made it clear there is a ton of electric technology in Textron’s enormous EZ Go electric vehicle operations in Augusta, Georgia. However he did not give any indication about the development of an electric sled.

We zeroed in on the now decade old relationship with Yamaha which sees Yamaha branding Arctic Cat snowmobile chassis’ while supplying Yamaha engines to Arctic Cat. The answer was clear that the relationship is solid and we didn’t get any sense of negativity which surfaced in the waning days of former Arctic Cat CEO Chris Metz tenure about three years ago.

Of continuing interest is the settling of the legal wrangling with BRP (Ski-Doo) as it relates to Arctic Cat’s use of a pyramidal style snowmobile chassis and the associated subtleties of the pyramid frame. Arctic Cat wasn’t at the liberty to speak on the litigation just yet. However, Arctic Cat is able to sell their snowmobiles in both the US and Canada without restriction.

There are some promising noises coming from TRF and some promising steps being taken by Arctic Cat’s snowmobile and off-road leadership team. Most notably, was the news that they’re planning to hire 400-500 employees over the next 4 years. As a result, we are expecting big things from Arctic Cat in the future!