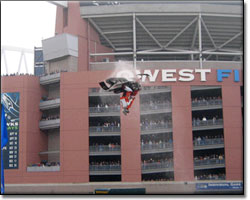 Already the pacesetter on the track and trail, Polaris snowmobiles will now soar above the competition in the wild and wooly world of snowmobile freestyle as Justin Hoyer, one of the world’s leading snowmobile freestyle competitors, has signed with Polaris and will compete and perform exhibitions on a 440 IQ™ race sled.

This is the same snowmobile that’s dusting the competition in snocross racing, and it shares the innovative Polaris IQ™ Chassis with the sport’s top trail performance models, the 600 HO Fusion, 700 Fusion and 900 Fusion.

Hoyer is a globetrotting snowmobile freestyle star who could ride any sled he wishes, but trusts only the Polaris 440 IQ on his aggressive routines. “This sled is more than I ever expected. It’s the best race sled out on the market today,” he said. “The 440 IQ handles large jumps well, the power delivery is smooth and it’s consistent. It does what you want it to do.” That consistently strong and reliable power is a must when you’re launching your snowmobile off a steep ramp and doing tricks such as a back flip while soaring 100-plus feet through the air.

Hoyer will ride the 440 IQ in freestyle competitions, during exhibition performances and in extreme action videos. He made his first appearance on the Polaris race sled in December in Seattle, where he performed in front of a huge crowd attending a Seahawks NFL game. “I was able to take the new IQ, pick it up and do a freestyle show on it. That’s how good it is out of the box,” he said.

Supertrax Onlinehttps://www.supertraxmag.com
Check back frequently for new content and follow us on social media!
Previous articleTrendy Sled Hauler
Next articlePolaris Sleds Approved for Riding in Yellowstone