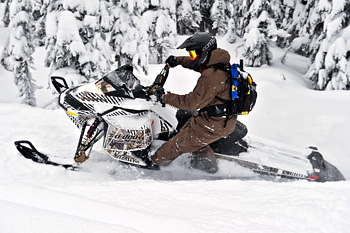 The Supertrax editors were pretty sure anything we chose as our “Editors Choice” this year would have an 800 E-TEC under its hood.

We’re in love with the MX-Z powered by this mill but a new sled from Ski-Doo is particularly fascinating to us.

The new-for-2011 Summit Freeride has a pretty magnetic pull and here’s why: Once again, this sled represents the ultimate in a somewhat new category. Yes, it does appeal to a fairly narrow wedge of the marketplace – those who want to freeride in deep powder.

This segment is growing and gaining more credibility out there and sales are indicating there’s a place for such sleds. With its race-derived chassis and various reinforcements of both the chassis and skidframe, plus a very serious shock package, the Freeride is a sled both mountain men and flatland freeriders can relate to.

Ski-Doo has tailored the Freeride to a younger market that views sleds in a different way than the conventional rider. Its feature load is aimed at pleasing the specific requirements of these riders and we give Ski-Doo due credit for reading the marketplace and keeping its corporate mind open to new opportunities.

Hey, we’d be first to admit the Freeride isn’t everyone’s cup of ginseng, but serving the youth market is a great thing for this sport and will build enthusiasm down the road. Just what snowmobiling needs.