Ski-Doo Lays Down an ACE 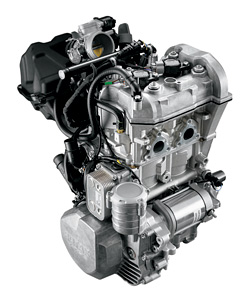 So the 800 E-TEC is definitely breakthrough technology for Ski-Doo and will keep the competition busy trying to match it over the next few years.

But what about the other end of the spectrum? What about those sleds bought for lower speed riding where optimum speed and performance aren’t the first criteria in making a buying decision.

If you’ve been keeping track, you know there’s a certain amount of concern about fan-cooled 2-strokes and their ability to meet EPA requirements for CO2 (monoxide) and HC (hydrocarbons) emissions.

In fact, a lot of those air-cooled 2-strokes, although fully evolved, do not have the potential to meet standards and have been able to survive this decade only because of the EPA’s credit system that allows the OEMs to accumulate credits for the squeaky clean engines they sell and then apply those credits to models in the fleet powered by less-sanitary mills.

Enter the new 600 ACE 4-stroke. It’s a 4-valve, dual overhead cam, 180-degree firing twin with a single 42mm throttle body. This relatively small displacement EFI parallel twin is designed to eventually take the place of those lower output engines that are difficult to get emissions compliance from.

With an output of 60 horsepower and a big dose of 4-stroke torque, this engine not only meets environmental requirements but is fun to ride and generates enough power to satisfy the segment’s demands. Without question, the ACE’s biggest plus will be improved gas mileage. Ski-Doo estimates it’s capable of an amazing 29 mpg.

The ACE 600 is available in several models for 2011 including a full-blown (no pun intended) MX-Z TNT. You can also order ACE in Ski-Doo’s 2011 Renegade, Grand Touring and in some Skandic and Tundra utility models.

Interestingly, all ACE equipped Ski-Doos come with a new lightweight primary clutch and an oil cooler.