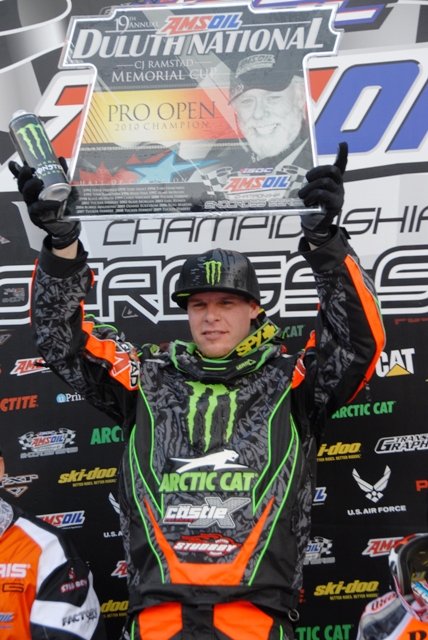 Team Arctic racers devoured the traditional Thanksgiving feast at the Spirit National Snocross in Duluth, Minn., claiming seven victories at the first stop on the ISOC National Tour, leaving only table scraps for the competition.

Tucker Hibbert delivered what has become his signature performance, taking the win in both Pro Stock and Pro Open with a monster display of speed and determination. Shaking off mediocre starts in both finals, Hibbert’s come-from-behind heroics brought the crowd to their feet and the competition to their knees.

Factory Team Arctic’s Cody Thomsen came within a couple laps of delivering his own sweep of the ultra-competitive Semi Pro class. His kicked off the weekend off with a win in the Semi Pro X Games qualifier on Friday, took the first Semi Pro Stock final on Saturday, then came oh-so-close to winning the Sunday Stock class final, finishing in second place.

Joining Hibbert and Thomsen atop the podium were Team Arctic/Christian Bros. Racing teammates Logan Christian and Garth Kaufman – each winning a Pro X Games Qualifier final – as well as Bradley Tatro who won the Transition 8-12 class.

In his first race on North American soil, Swedish snocross sensation Johan Lidman proved he’s a podium contender in the Pro class, taking a fourth in the Pro Open and third in his X Games qualifier final for the Arctic Cat/Sportech team.

“The first race of the season is always a pressure cooker, and it’s good that we’re the team that’s turning up the heat,” said Team Arctic Race Manager, Mike Kloety. “The Sno Pro 600 proved itself ready-to-win out of the box and our contingent of racers and teams show the kind of passion that makes everyone at Arctic Cat proud to claim them. As always, Tucker’s performance was outstanding, as was Cody’s. I’m equally pleased with Johan’s debut race here in America. We put seven Team Arctic racers in the Pro Open final, five in the Stock final and qualified six of our guys for Winter X Games. Duluth is typically a predictor of what’s to come, and I like what I see.”

The next race in the ISOC National Snocross Series is Dec. 10 – 11 in Fargo, ND Go to www.isocracing for more information.