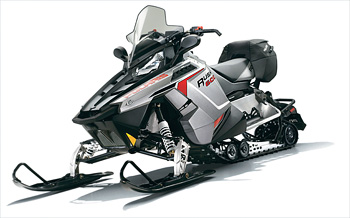 Right out of the box the RUSH Pro-ride gave off a completely new transfer-reactive feel lacking in the original 2010 version.

In loose snow, not particularly good for traction, the RUSH lifts its nose on command whenever the throttle is cracked with authority.

Ride compliance feels improved, particularly in the rear arm’s response. We haven’t used the RUSH’ “key” to set the rear shock yet but we intend to do some fiddling right away.

The execution of the new rear cooler is better than what we saw in Yellowstone last March. You can hardly see the hoses running into the rear articulated section of the skid and the cooler does a superb job of shedding heat, keeping the rear flap clear of snow.

The RUSH immediately displayed its laser-level handling prowess on the loose snow we were on providing nice flat turn-in at high speed.

Speaking of speed, the 600 CFI felt even stronger than the Ski-Doo 600 E-TEC we ran this weekend.

It must be remembered the E-TEC ECU holds the DI engine back until the clock clears five hours of run time so this may be a premature conclusion.

In any case, the improved weight transfer makes the RUSH feel more lithe and urgent when whacked.