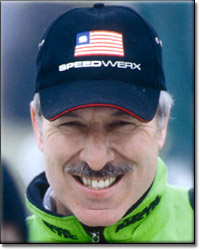 Russ Ebert takes over the reigns in maintaining and building the premier race team in the snowmobile industry. With over four decades of experience in racing and developing snowmobiles, Team Arctic racers will benefit immediately from his knowledge, experience and hands-on involvement.

Robert Bonev, Vice President Sales and Marketing states “Russ is one of the most experienced and well respected members in the snowmobile racing community and will be a huge asset to Arctic Cat.

It is our intention to not only dominate in snocross but also increase our involvement in all forms of racing from hill climb to ovals and drag racing and Russ will be instrumental to that end.”

Not only is Russ a longtime veteran of Snowmobile Racing – with Crew Chief responsibilities for Tucker Hibbert, but Russ also has a long history with NASCAR – being on the team with Dick Trickle throughout the 1980’s and early 1990’s.

Ebert will spend the first few months at his new post shoring up contracts for next years race season. Russ’s first objective will be more training for Team Arctic racers and mechanics during the off season.

But don’t let all that desk time fool you, Ebert states, “I’m a hands-on guy and will still be knee deep in development working with the SnoPro team because that kind of work is also my passion.” When asked what his philosophy for Team Arctic will be, Ebert says simply “We race to win, anything else is a waste of time.”