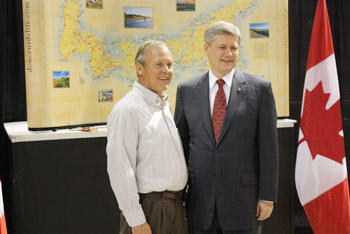 American and overseas delegates to the International Snowmobile Congress (ISC) quickly learned just how important snowmobiling is in Canada.

Canada’s leader received this award, the highest honor granted by the CCSO, for delivering on his commitment to expand Canada’s network of national trails.

“I am honored to receive this award from an organization that appreciates and understands the importance of conserving Canada’s natural heritage so it can be enjoyed by future generations,” said the Prime Minister. “Investing in Canada’s national trails helps create jobs today. It also opens up new opportunities for tourism businesses and allows more Canadians to enjoy the Canadian countryside in a safe and responsible manner.”

The Prime Minister announced on March 6, 2009 that, as part of Canada’s Economic Action Plan, his government was investing $25 million to expand Canada’s national trail system.

The National Trails Coalition, of which the CCSO is a key member, has pledged to match this investment to a total of $50 million. As a result, snowmobile associations and clubs across Canada are partnering under the Go Snowmobiling banner with provincial and local governments, economic development agencies, chambers of commerce and tourism offices to boost their winter economy with major upgrades to snowmobile trails this year.

“On behalf of our volunteers, clubs, riders, snowbelt communities and the snowmobile industry, we are pleased to recognize the Prime Minister’s exceptional leadership and support for our snowmobile tourism trails,” said Kevin Sweetland, ISC co-chair and CCSO president, upon presenting the Prime Minister with the award. “Snowmobiling and winter are part of our heritage and this investment from the government of Canada lays out a new white welcome mat to encourage even more people to go snowmobiling.”

Supertrax Onlinehttps://www.supertraxmag.com
Check back frequently for new content and follow us on social media!
Previous articleMinnesota’s Powersport Icon Retires
Next articleNytro Will Race Again This Season