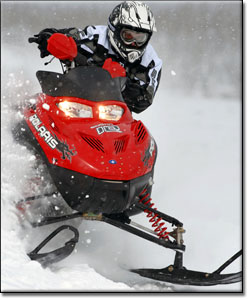 Polaris snocross racers on the IQ race sled showed both their individual strengths; the combined power of the Polaris racing program; and the unmatched IQ chassis and suspension throughout the just-completed 2006-2007 WPSA PowerSports Snowmobile Tour 10-race season.

In the Pro Women’s class, Kylie Abrahamson ran strong in the season finale at Lake Geneva, Wisconsin, on the weekend of March 16-18, to win the season points crown, giving Polaris all three WPSA Pro points titles for the season.

“We had a good weekend in Lake Geneva and clinched three important Pro titles,” said Polaris Racing Manager Tom Rager, Sr. “Against the stiff competition we face on the WPSA circuit, you need dedicated racers, strong team support and great race sleds to win even a single title, let alone three Pro titles. The guys in Roseau gave us more than a great race sled, the Polaris IQ racer is a tremendous snowmobile, and we used it to our advantage all season.”

Rager said it was unfortunate that Polaris racer Brett Bender (Hentges Racing) got edged out in the Semi-Pro Open class points race, but the strong showing by the Polaris Semi-Pro racers bodes well for the future.

“Pro racers like Ross Martin developed through our Semi-Pro program and this season we had several Semi-Pro racers who got some great experience and learned what it takes to be champions,” Rager said. “They should do well next season, whether they’re running Semi-Pro or step up to run the Pro classes.”

The evolution of Ross Martin into one of the sport’s premier racers continued this season, in only his second season competing strictly in the Pro classes. He came into the final weekend with a large points lead in Pro Open, and clinched the title during qualifying rounds on Sunday morning.

Two years ago Martin won both Semi-Pro points titles, and last season he finished second in both Pro classes. He won five Pro Open races this season en route to earning the title with 559 points, 45 ahead of the second place finisher.

Knowing he needed only to finish well to clinch the Pro Stock points title, TJ Gulla cruised home with a sixth-place finish at Lake Geneva, giving him 541 points for the season, nine ahead of the runner-up. By securing the Pro Stock title, Gulla was free to run loose and aggressively in Pro Open at Lake Geneva and he won the weekend’s Open class.

Polaris racer Kylie Abrahamson entered the weekend 15 points behind the leader in Pro Women’s points, but the Brainerd, Minnesota, racer won at Lake Geneva on Saturday to erase the deficit and win the Pro Women season points title. The victories capped her three-year comeback from a serious racing injury, and she looks forward to running some Semi-Pro events next season.