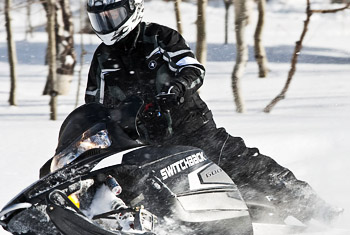 Although the RUSH LX is only available as a 600, there’s an IQ-based Turbo LX and, just so you’ll be confused, it has a 136-inch track.

Pay attention because there are also three LX-T (Touring) IQ twofer models including a Turbo, a 600 Cleanfire and a 550. All have the expected amenities touring sleds demand including heated rear passenger grips. Polaris does not offer a heated seat on any models, yet.

The other place you’ll find the IQ platform used next year is the IQ Switchback family. There are no Dragons offered in MY 11 and 600 Cleanfires power two 136s – a regular IQ Switchback and a Shift 136. There’s also a 136-inch tracked 550 Shift.

For those who live for 4-stroke power, the Switchback Turbo remains and is the only remaining IQ model with the original Rider Select moveable handlepole. The big news here is the aforementioned Assault Switchback built on the Blackjack platform.

Included is a 144 tipped rail skid, Walker piggies and all the lightweight stuff RMKs sport. You may be asking why the Switchback platform isn’t using a stretched Pro-Ride rear suspension this year. Uh-huh, so are we. However, we suspect Pro-Ride can be used on a 136 and it’s only a matter of time until Polaris will bring it.

Clearly, Polaris is moving its entire fleet into RUSH/Blackjack clothes at a rapid pace. None of us expected the company to go this far with second year changes based on the RUSH/Blackjack chassis.

The new 800 engine in the RUSH is radically different from the IQ 800 four injector version. The RUSH platform has proven to be both super durable, reliable and flat cornering in a way that’s comparable only to Ski-Doo’s XP at this writing.

The Pro-Ride rear suspension has undergone a major revamping and we think Polaris is going to take Pro-Ride more places in the future after overwhelming rider acceptance and approval this season.

There’s still more to talk about from Polaris, however, we’re saving our opinions, insights and criticisms for the first issue of SUPERTRAX due out September 2010.

Read all about the 2011 Polaris sleds