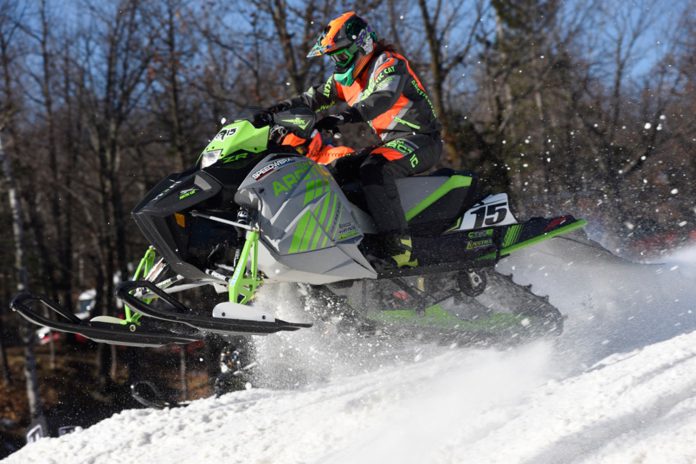 St. Cloud, Minn. (Nov.29, 2017) – In what is already regarded as one of the most impressive and dominant debuts of a brand new race snowmobile in the history of snocross, Team Arctic racers launched into the 2017-2018 ISOC National snocross season and landed a debilitating blow on the competition. The results were monumental: 14 wins in 20 classes, and 25 out of 60 podium finishes for Team Green. For the riders, crew and fans of Team Arctic, it was a race for the ages and a revelation of what’s to come.

The list of class winners was a mixture of new and familiar names. Tucker Hibbert was as dominant as he’s been at any point of his phenomenal career, going undefeated to win both Pro finals by a substantial margin. Factory Team Arctic’s Travis Kern and Dan Benham each traded wins in Pro Lite, a class that was crowded with Team Green riders in both finals. Wes Selby won Pro Am 30 Plus, while Ryley Bester and Trent Wittwer each scored a win in the Sport classes. Sophia Hulsey won Jr. Girls, Jesse Hallstrom led the 200 Stock brigade, Drew Freeland topped Transition 8-13 and Tucker Haala captured Champ 120. And the indomitable Anson Scheele announced himself in the Sport and Junior categories with authority by scoring three class wins!

These and the other Team Arctic racers highlighted in the results below were boosted by the biggest winner at Duluth: the all-new stock Arctic Cat ZR 6000R SX.

The product of an intense effort by Arctic Cat engineers and racers, the new snocross ZR revealed itself as the ultimate weapon of Stock class warfare thanks to its ProCross chassis and ARS front suspension with taller spindles and revised geometry; a longer 137-in. track and revised SLIDE-ACTION rear suspension; the added power of a more refined C-TEC2 EFI engine; and an array of ergonomic improvements.

“This might be the all-time greatest performance at the Duluth opener by a single brand in the 26-year history of the race,” said Mike Kloety, Team Arctic Race Manager. “The competition is strong, but we were getting holeshots and handling great in rough bumps and tight corners. Our riders came in stronger, healthy and prepared, and they raved about the confidence they feel on the new ZR 6000R SX.

“This is what happens when you combine the best snocross machine we’ve ever built with talented and dedicated racers and teams. We thank all of them, plus the Arctic Cat engineers and Race Department personnel who came together to achieve this epic performance. There’s a lot more racing to come this season and we couldn’t be more excited about it. This is the year of the Cat.”

The Arctic Cat snowmobile brand is among the most widely recognized and respected in the industry. The company designs, engineers, manufactures and markets snowmobiles, in addition to related parts, garments and accessories under the Arctic Cat® and Motorfist® brand names. For more information, visit: www.arcticcat.com.

Supertrax Onlinehttps://new.supertraxmag.com
Check back frequently for new content and follow us on social media!
Previous articleFINDING THE RIGHT SLED
Next article5 REASONS NOT TO BUY A HYPERSLED