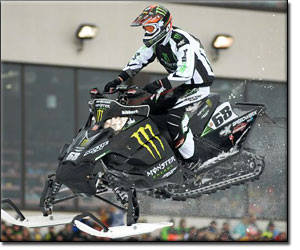 Round two of the World Powersports Snowmobile Tour at Canterbury Raceway in Shakopee, Minn., ended with Team Arctic racers delivering several punches to the competition, including knockouts by Tucker Hibbert in both Pro Super Stock finals.

“I’m so proud of our racers, who continue to win more than their share of the finals and podium spots,” said Team Arctic Race Manager Russ Ebert.

“Our team isn’t as large as a couple others, but the dedication of our racers and performance of our new Sno Pro 600 race sled more than make up for it.”

Indeed, in just the second WPSA National of the season, Hibbert piloted the Sno Pro to its first Pro class win, and then backed it up with another stock class win during the double-header weekend.

Team Arctic’s Ryan Simons and Carl Schubitzke backed him up with a third and fourth in one of the finals.

“It feels awesome to get a pair of wins for Arctic Cat on the new race sled,” said Hibbert, who is also sponsored by Monster Energy. “It’s a testament to how hard everyone has worked to develop it. To leave Canterbury with the stock class sweep is great.”

A broken collarbone suffered by Schubitzke during the double header tempered the excitement of the weekend.

“Carl will be out for most of the season,” said Ebert. “That’s a tough blow to Carl and to the team. It puts added pressure on the guys to place well at the WPSA National in West Yellowstone next weekend, and at the ESPN X Games the following week.”

For more information on Team Arctic racers, please log on to ArcticCat.com.