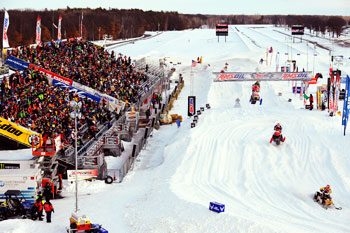 With temperatures flirting with the 40-degree mark and warm February sunshine illuminating the massive Brainerd International Raceway grandstands, a record number of fans jammed the legendary drag strip for Round 4 of the AMSOIL Championship Snocross Series to witness the continued domination of the Pro ranks by Tucker Hibbert.

With an estimated 4,500 fans on hand, Tucker Hibbert came from behind to win the featured race of the evening on what was described by many as the most technical track of the season.

Hibbert failed to capture the holeshot of the Pro Super-Stock final for only the second time this season, emerging from the turn one traffic jam in sixth position in the 25 lap Pro main event.

Perhaps even more surprising was Hibbert was the number two qualifier on the day, as first year pro Brett Bender claimed the top qualifier honors with an impressive heat race victory earlier.

But before the first lap was completed, Bender was ejected from his sled while attempting to negotiate a nasty section of moguls coined the “manufacturer’s land mine”.

That allowed another first year pro and last year’s semi-pro year-end champ, Andrew Johnstad (Polaris) to take over the lead followed by TJ Gulla (Polaris), Carl Schubitzke (Cat), Garth Kaufman (Cat) and Tucker Hibbert (Cat). By lap four, Tucker had already worked around Kaufman and Schubitzke for the third position, while further upfront, Gulla shuffled past Johnstad for the lead.

With just three seconds separating Hibbert from the front of the pack, it took Tucker only three more laps to find himself sniffing on the bumper of Gulla for the lead.

And it was on lap 9, that Tucker and Gulla skied the finish line jump side-by-side with Tucker tucking to the inside of Gulla on the landing to allow Tucker to find himself at his usual position on the track – at the front.

“I didn’t have a great start,” said Tucker after the race. “The track was nasty and I had to check-up a few times; there was a lot of carnage and yellow flags out there. When I saw TJ (Gulla) in front of me I thought, man how did he get there from the back row. But I knew there was a lot of laps left and I was patient and kept charging.”

By mid-race the running order up front was Tucker, Gulla, Johnstad and Kaufman. With a significant gap behind Kaufman, a pack of sleds ridden by Schubitzke, Matt Piche (Cat), Brett Turcotte (Cat), Robbie Malinoski (Doo) and Ryan Simons (Cat) battled for the remaining top five position.

Back at the front, Tucker continued to click-off smooth, consistent laps and TJ Gulla kept pace with Hibbert just 6 seconds back, but was unable to gain ground as the race wore on.

Behind them, Kaufman worked his way around Johnstad on lap 13 and also kept pace with the leaders, 13 second back. It was as a running order that would hold until the checkered flag on lap 25. They were followed by an impressive ride by Johnstad for fourth and Ryan Simons in fifth.

“I made a few mistakes early in the race,” said TJ Gulla from the podium box after the race. “After he (Tucker) got around me I started to follow his lines and learned a lot. My lap times actually picked-up as the race went on.”

Kaufman, who led a strong showing for Christian Brother’s Racing who placed three sleds in the final top ten, was pleased with the run. “We’ve got such incredible teamwork going right now,” said Kaufman. “It’s not just with Christian Brothers but the entire Arctic Cat racing effort. It makes it a lot of fun to know everybody is working together.”

It was Ebert who drilled the holeshot at the start of the 20 lap final, and appeared to have the advantage early as he opened up a small gap over the rest of the field that included Tremblay, Christian Salemark (Cat), Mike Bauer (Polaris), Paul Bauerly (Doo) and Cory Davis (Cat).

As a host of yellow flag incidents shuffled the running order of the middle pack several times during the race, the real battle remained at the front, as Tremblay would creep up to Ebert’s bumper on more than one occasion, only to have Ebert shut the door.

But on lap 13, Tremblay finally made a charge for the lead stick, as lap traffic played a role and Tremblay used it to his advantage to pass Ebert on the exit of the non-rhythmatic mogul section. Behind them, Salemark hung onto the third place position while a charging Cory Davis picked off Bauerly and Bauer to move himself into the fourth spot.

At the line it was Tremblay, followed by Ebert just a little over 4 seconds back, Salemark, Davis and Derek Ellis (Polaris) who also charged through the pack after a less than ideal holeshot to complete the top five.