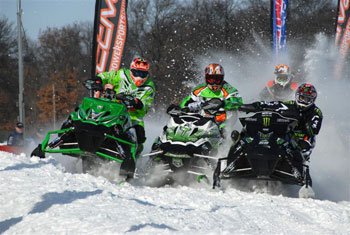 The famed Brainerd International Raceway in Brainerd, Minn., witnessed another historic performance as Team Arctic racers stormed to five class victories in Round Four of the ISOC Championship Snocross Tour.

Leading the charge was the indomitable Tucker Hibbert, who finished his perfect, abbreviated season with two more Pro class victories.

While there are no guarantees in racing, it was little surprise that Hibbert would remain undefeated. The Goodridge, Minn., sensation hasn’t lost a heat or final all season and, with Brainerd pegged as his final race until next year, he once again put his stamp on both Pro Super Stock and Pro Open.

Team Arctic racers filled five of the top-10 spots in each Pro final, with Garth Kaufman taking third in the Pro Stock final.

When asked if there would be chance he would return for the last race of the season in Lake Geneva, Wis., Hibbert responded with a nod to his father Kirk, “If we’re going to Geneva this sled will have a #41 on it, my dad will be racing and I’ll be running the pit board.”

With Hibbert stepping away at Brainerd, Cory Davis stepped up big-time in the Semi Pro Super Stock final. After emerging from the first lap chaos with a lead, Davis scorched a series of laps that put him front by a large margin, and then cruised to the win.

Teammate Dan Ebert was a victim of the first lap shuffle, but with a strong run and never-give-up approach, put himself back into contention and finish third. Ebert, Christian Salemark and Davis were equally tough in the Semi Pro Open final, finishing second, third and fourth respectively.

“It feels good to finally get a win this season,” said Davis, “Especially after being so close to winning at Canterbury earlier this year. I’m confident more wins will come during the second half of the National tour.”

In the Sport Super Stock #2 final, Thomsen brought the hometown crowd to its feet as he laid down a series of blistering-fast lap times and took the win. Team Arctic’s Dusty Miller finished second, just as he did in the previous day’s Sport Super Stock #1 final.

J.C. Hupe took her first National win of the season in the Pro Women’s final despite suffering being bruised and battered with a foot injury.

“The first half of the race season is complete and we’ve enjoyed the most wins and greatest success,” said Mike Kloety, Team Arctic Race Manager. “In the second half you’ll see the true strength of our racers, teams and Arctic Cat Engineering staff as we work harder to improve our race sleds and achieve our championship aspirations. That challenge is what they race and live for, and it’s what keeps us ahead of the competition.”

“We can’t just replace the spot in our team that Tucker filled in the first half of the season, but we’re fortunate to have some other very hungry and talented Pro racers who have tasted the podium and are ready to take the top step for us.”

The ISOC Championship Series heads on an Eastern swing, beginning with the Arctic Cat Eastern National in Farmington, N.Y., Feb. 13-15. For more information, go to www.isocracing.com.

About Arctic Cat – Arctic Cat Inc., based in Thief River Falls, Minn., designs, engineers, manufactures and markets all-terrain vehicles (ATVs) and snowmobiles under the Arctic Cat® brand name, as well as related parts, garments and accessories. Its common stock is traded on the NASDAQ National Market under the ticker symbol “ACAT.” More information about Arctic Cat and its products is available on the Internet at www.arcticcat.com

Supertrax Onlinehttps://www.supertraxmag.com
Check back frequently for new content and follow us on social media!
Previous articleSnowmobile Destination
Next articleTeam Arctic Sweeps Up at Bear Lake Hillclimb