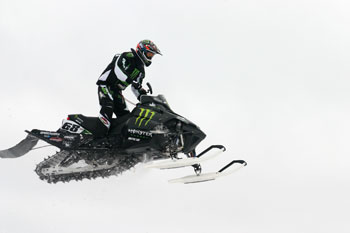 Tucker Hibbert completed his last race of the AMSOIL Championship Snocross Series the same way he started it – with a convincing win, completing his perfect condensed season going 8 for 8 in Pro finals aboard his Monster Energy Arctic Cat.

With warm February sunshine, a technically challenging track and a packed house on-hand, Tucker Hibbert led the final field of 16 nearly flag to flag in the Pro Open main event.

The showcase race of the weekend was one of many firsts on the 2008-09 AMSOIL Championship tour.

Aside from Tucker completing his perfect season quest, the race also marked the first pro podium for Brett Bender; as well as the first final of the season which saw both factory Yamaha sleds in the main.

It was first year pro Brett Bender (Polaris) who snagged the holeshot at the start of the 25 lap final, close in tow was Gulla (Polaris), Turcotte (Cat), LaVallee (Pol) and Crapo (Polaris) as they made their way down the back-straight mogul field.

TJ Gulla, who previously in the weekend took a second in Pro-Stock quickly had his hopes dashed for another podium finish as his throttle cable broke on the first lap.

Meanwhile Hibbert emerged from the start in seventh, but quickly dismissed several riders and moved into second behind Bender at the close of the first lap.

“The warm temps made the track sticky and the snow heavy,” said Hibbert after the race. “The roost was going to be an issue so I wanted to get out front as fast as I could”

And to the front he went, overtaking Bender in turn one on the second lap. Following the trio of Hibbert, Bender and LaVallee in the early laps was another first year pro, Andrew Johnstad (Polaris) who got around Turcotte and settled into the fourth position.

Behind the leaders a battle raged as positions shuffled seeing Piche (Cat), Kaufman (Cat), Malinoski (Doo) and Taylor (Yamaha) work their way through the pack.

However the trio of Hibbert, Bender and LaVallee proved on this day they had too much of a good thing and retained their positions the entire 25 laps. It appeared briefly Levi might take over the second spot, but Bender showed poise and found fast lines and opened a gap on his National Guard Polaris teammate Levi. Behind them at the line it was Piche, Kaufman, Malinoski and Johnstad, while Taylor suffered a mechanical and was forced to pull off on lap 22.

It was an exciting post-race celebration for young Brett Bender, who was noticeably emotional after being awarded his second place trophy. “To be standing here (on the podium) with these guys is awesome,” said Bender. “I’ve been watching some of them since I was a kid and this is a goal I’ve been working towards for a long time.”

For Hibbert, Brainerd marked his last race of the season, as he shifts his focus on preparing for the national AMA motocross season. “Next weekend (Valentines weekend) I’m going to get my wife flowers,” said Hibbert jokingly. “Then I’ll start to focus on motocross. It’s been a lot of fun and I’ll be back next season, but this is less about championships and more about enjoying life and doing what makes me happy.”

When asked if there would be chance we would see him back on the tour for the last race of the season in Lake Geneva Hibbert responded with a nod and a smile to his father Kirk, “If we’re going to Geneva this sled will have a 41 on it and my dad will be racing and I’ll be running the pit board.”

Supertrax Onlinehttps://new.supertraxmag.com
Check back frequently for new content and follow us on social media!
Previous articlePOLL RESULTS
Next articleYamaha Helps Dealers and Consumers