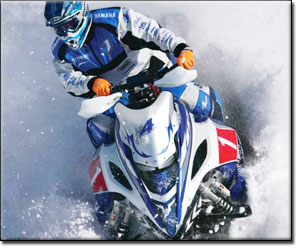 At the start of the first heat, it was Yamaha rider Masafumi Terasaki who grabbed the holeshot. He was followed into the first turn by Shinji Tozawa, Tomonori Matsuda (A) and Nobuaki Eikura. But in that first turn, Tozawa and Matsuda bumped into each other and took a fall.

Besides that, Terasaki developed machine trouble in the first lap that forced him to retire from the race. That left Eikura to take over the lead and run on alone well ahead of the pack.

Entering the middle stages of the race, Eikura continued to race at a steady, high pace, but he was being chased all the time by Masaki Sasaki (S).

On lap seven Sasaki had closed in on Eikura’s tail, and on lap nine he slipped past Eikura into the lead. Shortly after that, however, Sasaki took a fall that put Eikura back in the lead and he ran on that way to win the heat.

Meanwhile, Yamaha rider Kiyotaka Kawagoe, who had come through the first lap in 4th position, lost two places after that to finish the heat 6th. Tozawa recovered quickly from his fall and managed to finish 10th, while Daishi Takamura finished 11th after a slow start.

In heat two, Matsuda took the holeshot, followed closely by Eikura and Tozawa. After that, however, the two Yamaha riders were unable to match Matsuda’s pace, and by lap four he had built up a roughly 10-second lead. Eikura and Tozawa continued to run in 2nd and 3rd positions respectively. Matsuda continued on that way to the checkered.

In the battle for 2nd, Eikura was able to run away from Tozawa and go on to finish 2nd. With his pace slowing somewhat in the latter stages of the race, Tozawa was passed by Sasaki on lap 11, but he was able to hang on to a 4th-place finish. After starting the race in 4th position, Kawagoe eventually dropped two places to finish 6th.

Takamura got off to a slow start and was unable to make up much ground during the race, eventually finishing 12th. Still feeling the effects of the injury he received at the last round in Nagano, Terasaki slowed during the early stages of the race and finally crossed the finish in 15th.

With this day’s results, Eikura got his second overall win of the season, following his victory in the opening round at Yuzawa in Niigata. The day’s 2nd-place winner was Matsuda and 3rd went to Sasaki.