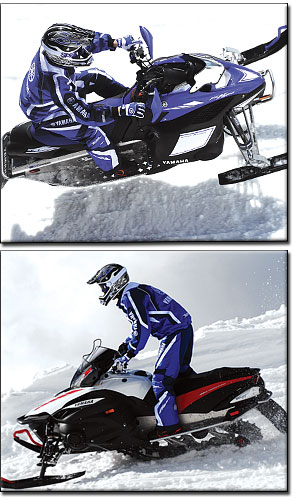 Yamaha drew a line in the sand in 2003 and has been true to its self-imposed edict: To deliver credible 4-stroke power to the mainstream snowmobile market.

This unswerving commitment has led to the largest investment in new product from Yamaha in two decades.

The FX Nytro is proof positive Yamaha has arrived as not only the 4-stroke snowmobile company, but as the world leader in building 4-stroke sleds.

The new Nytro levels the last nagging objection to 4-stroke power: Weight. While not as light as the new Ski-Doo XP platform, it is lighter than many 2-strokes with similar power.

This, combined with a revamped A-frame IFS with improved geometry and an engine producing reliable 135hp-level power without more pistons, cubic inches or a turbocharger, makes the Nytro a superb trail weapon by any standard.

You read it right. Not only does Yamaha win Best in Class, it takes Runner- Up honors with the all-new and radically improved Vector.

Until the arrival of the Nytro, the Vector had been our favorite 4-stroke sled among all the trail hardware we evaluate every season.

Now, with the original carbureted Vector 120hp triple inserted in the rider-forward and slick handling Apex chassis using the easy-adjust single shock wonder-skid out back, Yamaha made it tough for us to decide which of its two all-new 4-strokes deserved to be called Best.

Supertrax Onlinehttps://new.supertraxmag.com
Check back frequently for new content and follow us on social media!
Previous articleEikura Wins Second of Season
Next articleDirect Injection Comes to Snowmobiling