“Can You Hang Contest” Winner Gets Big Surprise 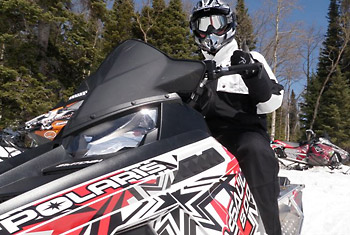 In an effort to capture some amazing television footage the crew from SnowTrax TV and Supertrax Magazine joined forces with Polaris Industries and Chris Burandt’s Backcountry Adventures to literally blow “Can You Hang?” contest winner Scott Ashlaw’s mind this past week in Kremmling, Colorado.

Scott Ashlaw was randomly selected from thousands of entrants in the “Can You Hang?” contest to join Supertrax Magazine – the sport’s number one snowmobile magazine and SnowTrax Television – the sport’s most widely viewed snowmobile television series and Polaris Industries at Chris Burandt’s legendary 10,000 acre facility for 2 days of riding in Colorado’s back country.

But this wasn’t all Polaris had in store for Ashlaw. Unknown to Scott, Polaris brought along a full set of their premium ToBe riding gear to keep him warm and dry. “The trip alone was enough” said Scott after receiving the gear, “But to get a full set of the sweetest gear I’ve ever seen is just over top”.

Riding with Chris Burandt was a learning experience for everyone involved. Scott had the ultimate opportunity to experience what the brand new, 2012 Polaris Switchback Assault was capable of under the close guidance of the sport’s most popular free rider.

The Polaris/Supertrax/SnowTrax Crew had one more thing up their sleeve at the end of two incredible days on the snow. After a short, unprompted interview covering Scott’s impressions of the potent 2012 Switchback Assault and after he made it very clear this would be his next sled… the crew from SnowTrax TV, Supertrax Magazine and Polaris Industries informed him he would be KEEPING the sled he’d been riding the past 2 days.

“I just can’t believe this.” said Ashlaw, “I honestly didn’t believe what I was hearing when SnowTrax TV Co-Host Luke Lester said the sled was mine, I thought he meant mine to ride for the day, but when I realized he really meant mine to keep, I think I tried to tackle him.”

Polaris representative Mark Nevills had this to say about the opportunity to partner in the contest: “Polaris is always trying to find ways to over deliver and exceed expectations. From the quality and performance of our products to getting involved in a contest like this, we always want to go above and beyond. In this case, Polaris couldn’t be happier awarding a new sled to a great guy like Scott.”

Over 600,000 entry ballots were mailed in copies of Supertrax Magazine and were available for entry at the Supertrax Magazine/SnowTrax Television and Polaris Corporate booths at leading consumer snowmobile shows throughout the fall.

Tune into SnowTrax TV this coming season to see the entire event – including amazing back country riding with Chris Burandt and Scott’s reaction to winning a new Switchback Assault in a special early episode featuring the “Can You Hang?” contest.

Thanks to Chris Burandt and Burandt’s Backcountry Adventures for their over the top hospitality and to Polaris for their participation and support of the “Can You Hang?” contest.

For information on all the exciting 2012 Polaris snowmobiles – including the Switchback Assault – go to www.polarisindustries.com and check out your new sled.

Celebrating its 17th year, SnowTrax Television is a magazine format show that is packed with editorial content that is tailored to every type of rider. Each episode features in-depth product evaluations, instructional tech tips, destination features along with the latest news in the industry. Affiliated with national broadcasters TSN and TSN2 in Canada and the Outdoor Channel in the United States, SnowTrax Television is the most watched snowmobile show in North America. For more information and the complete broadcast schedule visit the SnowTrax Television website at www.SnowTraxtv.com