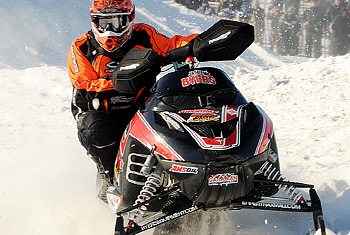 After 5 weeks off after the CSRA Season Opener, The Supertrax Magazine/ Polaris/ Byers Motorsports team headed north to Round 2 in Rouyn-Noranda, Quebec.

Needless to say there was no lack of snow at this facility as the race site was at the city’s snow dump site with snow banks about 25 feet tall.

Word around the track was that some of the snow stays year round and they had a Snowcross race in August last year.

Jamie hit to the track on Saturday with the Semi-Pro stock class. In moto #1, Jamie had a good battle with #381 Brady Dennis, a fellow Byers Motorsports Sponsored Rider, for 1st place, getting right beside him but was unable to complete the pass.

Moto #2 didn’t go quite as planned. Jamie got a good start but was hit hard by another rider flipping and spinning the sled. By the time he was able to get the sled back on its skis and going again he was half a lap behind the next rider.

Jamie charged hard and caught the pack but ran out of time to make the pass in the 5 lap moto. With a tough second moto, Jamie qualified 11th starting in the back row for the final. He was able to avoid a crash in the first corner came across the finish line in 6th.

Jamie struggled with sled set-up in Sundays Open class though out the moto’s and the final. The day started off with a re-started moto #1 after a rider jumped the start.

On the re-start, Jamie grabbed the holeshot but was hit in the first corner, pushing hit out of the preferred line and punching a hole in the side of the belly pan allowing snow to get at the clutches.

Running 4th, he got crossed up over the 80ft double and came off the sled on the landing, finishing 8th. Finishing 5th in Moto #2, Jamie qualified 14th for a back row start in the Open final. Jamie came out of the first corner in the open final in 11th.

Jamie battled an awesome race picking off one rider after another. Charging through the field, he made the pass for 5th with one lap to go and held on for a Top 5 finish.

“We struggled with the mod sled all day and wasn’t able to make many changes between moto #2 and the final as we ran out of time and just had to race the sled the way it was. I’m happy with the Top 5 finish” Jamie said after the race. “I have thank Powermadd for making the XL Handguard Flares keeping my hands warm in the -21*C temperature. There’s nothing worse than cold hands during a race.”

Byers Motorsports will be without our Sport rider, Kyle, until the end of February due to prior commitments trying to balance College and racing. We are sure that the Sport class is glad to hear this.

Our next race is National Round #2 in Lindsay, On at the Lindsay Fairgrounds this coming weekend.

Thanks to all our Great Sponsors: