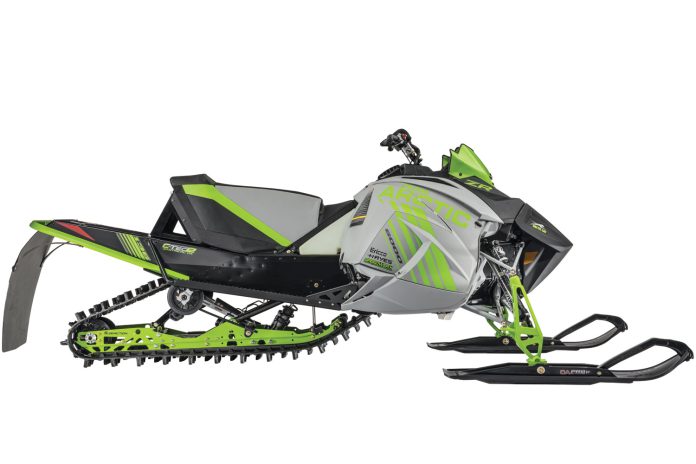 Arctic Cat is aiming an all-new 2018 ZR 6000R SX snocross race machine at the top step of the podium this season thanks to a wide array of technological improvements that deliver improved handling, greater predictability in rough conditions, optimal ergonomics and better throttle response.

The result of an intense effort by the Arctic Cat Engineering and Race Departments, the 2018 ZR 6000R SX snocross machine is new from nose-to- tail, with more than 350 new parts compared to the previous year.

“Many of the improvements we’ve made to the 2018 ZR 6000R SX were inspired and proven by the Pro Open snocross sleds raced by Tucker Hibbert and Logan Christian during the past several years,” said Brian Dick, Arctic Cat High Performance/Race Product Team Manager. “In fact, both racers played a big role in the testing and development of the new sled and, after some late spring testing, con rmed the huge improvements we were aiming for.”

It starts with a longer 15 x 136 x 1.75-in. SnoCross track and revised SLIDE-ACTION rear suspension that deliver improved traction for holeshots and acceleration, greater straight-line stability on a rough race course; and improved traction while braking. A new rail pro le places 6-in. more rail contact on the snow (compared to the previous 129-in. track) for improved bump compliance and reduced bottoming on the chassis.

Racers will appreciate a full range of ergonomic improvements to the new ZR 6000R SX, including a new lightweight seat design that works in concert with a new, ultra-compact 3-gallon fuel tank, Next Gen side panel bodywork and a new console to allow easier movement around the sled, especially for cornering, as well as a lower center-of-gravity.

Racers will be able to move further forward on the sled while cornering, with more clearance for legs and knees. New foot enclosures complement the upgrades.

Weight was trimmed everywhere. Besides the seat and lightweight fuel tank, a new hollow driven shaft, headlight assembly and revised chassis components shave off several pounds to offset the marginal weight increase of the longer track and rear suspension.

When it comes to holeshots and accelerating out of corners, a heavily revised Arctic Cat C-TEC2 6000 EFI engine delivers a 15% increase in horsepower and torque and a 20-percent improvement throttle response at low- and mid-range levels thanks to new cylinder and exhaust valve con guration, revised calibration mapping and V-FORCE reeds.

The massive changes and upgrades re ect Team Arctic’s desire to give its racers the most potent stock snocross snowmobile, from the Junior class
to Pro. It re ects many of the same features and technology used on previous Pro Open sleds piloted Tucker Hibbert and Logan Christian. And both racers spent considerable time testing the all-new production racer.

“We took a lot of the ideas we’ve been using on my winning Pro Open sled the past two years and applied them to the new race ZR,” said Tucker Hibbert. “The changes to the front suspension made it better than anything we’d previously used on our race sled. From a handling standpoint, this is the best stock ZR we’ve ever had. It’s more stable and tracks straight, without kicking sideways; it doesn’t scrub speed on hard landings or when pounding through big holes; it turns better; and the new narrow bodywork is a huge improvement.”

The 2018 Arctic Cat ZR 6000R SX can only be purchased through the Arctic Cat Race Department.

To apply, go to arcticcat.com/teamarctic and click on Riders Only Information.