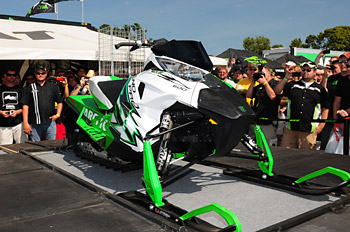 The official start to winter kicked off today at the largest snowmobile event in the world – Haydays.

Halvorson said the all-new Sno Pro 600 will build upon last season’s winning success and the success of the recently introduced ProCross chassis.

“Racing has been a strong cornerstone of Arctic Cat’s heritage and brand. An arena we have consistently used for testing and development. It’s our commitment to race the ProCross chassis and show the world that our consumers can buy the same snowmobile to conquer the world’s toughest terrain.” said Brad Darling, GM Snow Division.

If he wins, Hibbert will become the only athlete in the history of Winter X to six-peat.

Hibbert has competed every year since 2000 and currently holds 10 medals, six of which are gold.

Arctic Cat CEO Claude Jordan stated, “Our talented engineers have built our best Sno Pro race sled to date, and that says a lot considering we won every major race or championship title last season. It’s going to be a tough year for our competition, but an even better year for our Team Arctic race fans!”

About Arctic Cat and Tucker Hibbert – Arctic Cat Inc., based in Thief River Falls, Minn., designs, engineers, manufactures and markets all-terrain vehicles (ATVs) and snowmobiles under the Arctic Cat brand name, as well as related parts, garments and accessories. Its common stock is traded on the Nasdaq National Market under the ticker symbol “ACAT.” More information regarding the all-new 2012 Sno Pro 600, and other Arctic Cat products please log on to www.arcticcat.com or visit your local dealer.