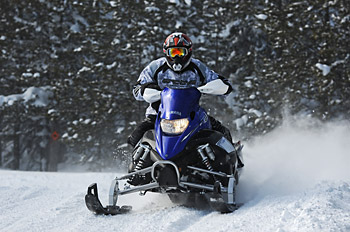 This year all Nytro models get the new Apex-style skis and 15mm trail geometry change but no EPS.

On the Nytro, the slight steering effort increase off-center may not be a bad idea as Nytro owners have complained in the past of the sled’s twitchiness at medium trail speeds.

By “slowing down” the steering response and utilizing a less aggressive ski, Yamaha may have made a sizable improvement in the Nytro’s trail handling.

It should be noted the 2012 8HV ski is considerably different in design compared to last year’s ski used on the Nytro.

From the bottom, the front part of the ski’s keel where it makes initial contact with the snow has been eliminated and the keel’s depth has been reduced to 21mm – about the same as a Venture ski.

Another tweak to the Nytro targeted at making it handle better comes from its new track.

This specially designed Camoplast RipSaw II version has the edges of the track lugs shaved on a 45-degree angle at the extreme outer edges.

While only making a marginal change in the track’s ability to bite straight-ahead, Yamaha claims it makes a huge difference in the 1.25’s ability to react to driver inputs at the handlebars during cornering maneuvers, particularly on hard or frozen snow.

This subtle adjustment to track design is intended to reduce darting and hunting and to offset the sled’s resistance to turn-in when handlebar inputs are applied.

It actually makes the sled oversteer a bit more and slide its tail out in corners when ridden aggressively.

The overall “softer” handling should be a welcome side effect when married to the new skis and front end geometry.