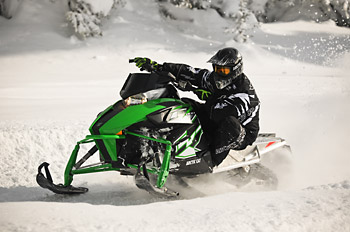 When we Rode the new ProCross Cats in West Yellowstone last March we were impressed with the initial sensation of the lightness of the 800.

The sled seemed to respond instantly to positional changes or weight shifting from the cockpit.

Even though the low weight of this chassis was evident, the skis felt very planted and steering was dead neutral and very predictable.

We weren’t expecting this kind of handling from Cat. A decade ago the company was renowned for its razor edged handling on the ZR series but sometime during the Firecat, Crossfire and Twin Spar years it became a distant memory.

The weight drop evidences itself when you get into the throttle on any of these sleds. Throttle response is instantaneous and very linear in its application.

From clutch engagement all the way through the tach digits this 800 doesn’t give up. The pull is phenomenal.

Cat has incorporated a new system called Arctic Drive System with TLC (Torque Control Link) that integrates the engine mounts, jackshaft mounts and secondary so the clutches’ center-to-center distance is always the same.

With belt deflection 100-percent constant, power is always being transferred through the driveline at its maximum potential, and you can really feel the difference it makes.

Same thing goes with the Turbo version. If you could ever describe a snowmobile as having too much power, it would have to be this one.

The launch on this thing is crazy – borderline insane – and corners come up so fast you’re constantly on the brakes and overcorrecting into the apex.

For a big sled, this one handles remarkably well, though, and although it feels more top-heavy than the svelte 800, compared to its max-power 4-stroke competitors this is still the lightest feeling, best handling big-inch 4-stroke out there.