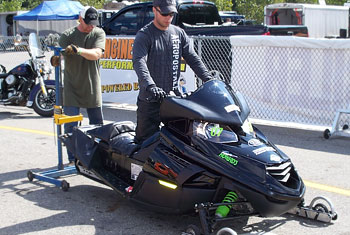 Weekend after weekend, Team Arctic racers are proving they are the ones to beat when piloting the World’s Fastest Stock Snowmobiles.

Instead of shredding grass, Team Arctic speed aces turned their attention to the Martin, Michigan Speedway to burn rubber on the asphalt.

Team owner Billy Howard said of the record, “We were hoping for the first 8 second pass, but this record really gets me excited for the speed of these stock Z1 Turbos. Just like Glen Hall’s Z1 Turbo last year, ours had the stock skid, stock motor and stock turbo. We can both honestly say that Arctic Cat does make the World’s Fastest Snowmobiles!”