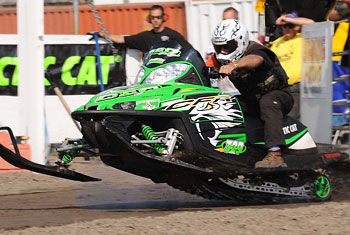 For the second weekend in a row Arctic Cat’s new CFR 800 showed that it’s dominate 800 class wins at Haydays were no fluke.

Piloting 2010 CFR 800s, Team Arctic’s Glenn Hall of Gordon, Wis., and Scott Moser of Lowville, N.Y., smoked the competition with wins in both the Stock 800 and Stock 1000 classes at the Ohio, NY SnowBash.

As well, Team Arctic’s Ron Gilland competed at the NSDRA grass drag in Jesup, Iowa and won both the 1000 stock class and Top Stock Shoot Out aboard a CFR 800 and took second in 800 Stock. Kelly Schilts was close behind on his CFR placing second in Top Stock.

“The 2010 CFR800 is proving itself weekend after weekend as one of the World’s Fastest Snowmobiles,” said Mike Kloety, Team Arctic Race Manager. “Consumers should be confident this sled will live up to its 160hp claim.”

Supertrax Onlinehttps://www.supertraxmag.com
Check back frequently for new content and follow us on social media!
Previous articleNew Venues Highlight National Snocross Schedule
Next articleIn The Market For A New Doo