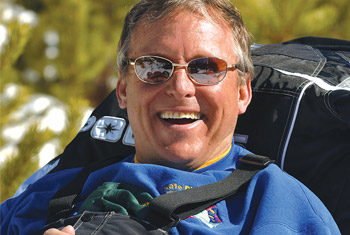 The International Snowmo-bile Manufacturers Assoc-iation (ISMA) sounds like a lofty organization. In fact, it is. However, the guy who looks after ISMA on a day-to-day basis comes off as humble and down-to-earth.

As the President of ISMA, Ed Klim carries the full weight of the snowmobile manufacturers’ reputations “on his back”. Unassuming and totally approachable, Ed never flaunts the importance of his role and the depth of his responsibility.

ISMA is the only place you’ll find Arctic Cat, Polaris, Ski-Doo and Yamaha sitting at the same table, pulling on the same end of the rope in an effort to further the interests of snowmobiling. In fact, ISMA is the place where the manufacturers show all their cards and report total industry sales numbers, breakouts of segment sales and all sorts of interesting data.

ISMA’s annual sales reports are considered the ultimate barometer of industry health. Along with data acquisition, ISMA is charged with lobbying and speaking on behalf of our sport at the very highest levels of industry and government.

When the West Yellowstone US National Park controversy boiled over a few years back, ISMA was in attendance, speaking on behalf of all those who love snowmobiling.

As well as rising to meet crisis situations and portraying our interests to national and international media, ISMA has been key in working with the US Environmental Protection Agency (EPA) as snowmobile emission limits have developed over the past decade.

Without this strong, unified voice from the four OEMs, stick handled and massaged with expert care by Ed Klim, we would be in a vulnerable position when issues of national importance hit the industry.

Make no mistake about this – ISMA’s ability to respond and speak clearly on behalf of all of who love snowmobiling is, in a large way, tied to the friendly, yet persistent personality of Ed Klim.

Go Snowmobiling Magazine had the distinct pleasure of speaking with Ed late this summer and gained a tiny snapshot of a man we believe is a true unsung hero of snowmobiling.

We asked Ed where the idea for the Go Snowmobiling Campaign originated. Ed was quick to give the credit to the International Snowmobile Media Council (ISMC).

Truth is ISMC couldn’t have brought the Go Snowmobiling concept forward without the valuable research ISMA initiated in an effort to better understand what non-snowmobilers think about our chosen recreation.

Ed made this clear in our discussion: Non-snowmobilers simply don’t know much about snowmobiling. We’re almost “invisible” and don’t blip the RADAR when it comes to families and individuals hunting for new winter recreational activities.

ISMA took the results of the research and the concept of a Go Snowmobiling campaign forward and began to promote it at every level, in particular to the snowmobile manufacturers.

Without ISMA and the consumer research it initiated, we wouldn’t be where we are with efforts to expand snowmobiling’s appeal across North America.

When we asked Ed about the OFSC’s Go Snowmobiling efforts, he was more than a little enthusiastic in his appreciation of Ontario’s embracing of the concept. In his words: “It makes sense for the OFSC to promote Go Snowmobiling. The message is clear and easy to convey. All our research data clearly indicated Canadians were just as oblivious to snowmobiling as Americans are. Sadly, it’s been a best kept secret on both sides of the border, but the OFSC is changing that with programs like Take a Friend Snowmobiling, the Go Try It Tour and the branding of the Go Snowmobiling Show and Go Snowmobiling Magazine.”

Ed understands the most important ingredient required for bringing new people into snowmobiling. In his words: “Take them for a ride”. Ed’s insistence on new snowmobiler enthusiasm being linked to experiencing it hands-on comes through loud and clear in his passion to see Go Snowmobiling spread across North America. In fact, his deliberate assertion every snowmobiler needs to take a friend snowmobiling is at the root of the issue. When asked how individual sledders can participate in Go Snowmobiling, Ed has but one answer: “Take a friend snowmobiling!”.

Take Them for a Ride!

Over the years, there have been many self proclaimed industry “experts” ready to stand up and speak on behalf of snowmobiling.

At Supertrax, we really don’t get too excited about commentary on our recreation when it comes from anyone less than a person as addicted to snowmobiling as the crazies around here. How about this: Ed has done something even some of our staffers haven’t achieved yet! He’s snowmobiled in every Canadian province! He made it clear to us his love of the sport is rooted in the solitude and scenery so prevalent on our trails.

However, despite loving the “get away from it all” aspect of snowmobiling, he’s not much different than us. He loves the camaraderie of snowmobiling; having the opportunity to meet friends, renew acquaintances and to be with people who share his passion for the winter outdoors. In short, he’s as sick as any of us.

Ed had an interesting Go Snowmobiling anecdote to share and it rings true for many snowmobile enthusiasts. Ed relates: “A Utah snowmobile dealer, Glen Zumwalt, told me how he took a good friend of his for a snowmobile ride last season. Strangely, he knew this person well but never considered inviting him and his wife for a firsthand snowmobile experience. Glen gave this couple a great first time riding experience and, to his amazement, the couple returned a short time later to his Utah dealership and purchased a sled”. Ed went on to say, “That’s what Go Snowmobiling is all about – take a friend for a ride and you’ll make a snowmobiler”.

Supertrax Onlinehttps://www.supertraxmag.com
Check back frequently for new content and follow us on social media!
Previous articleMonster Energy Slednecks Invasion Tour Joins ISOC
Next articlePURE POLARIS NEXT ROUND OF WINNERS ANNOUNCED