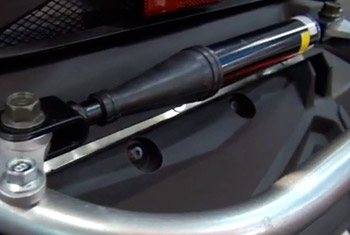 We’ve written on this website earlier this season about the Yamaha-exclusive performance damper the company has been experimenting with. It all sounds a bit like smoke and mirrors until you ride a sled that has this strange, unique feature.

Two shocks are mounted laterally, one at the front of the sled, under the hood, one at the rear externally right between the tunnel and rear bumper and their damping effect is designed to “calm” the vibration and chassis “noise” generated as the sled is cornered or ridden through bumps (noise is a term used to describe excess working of the co-joined parts of the snowmobile that work in harmony to create unpleasant input).

By damping these forces, the sled actually smoothes out and rides better and those who have tested it swear it makes a difference in handling.

Sound fishy? It really does seem suspect, but the performance damping system is already in use on certain high performance cars in the auto industry and was first introduced to the marketplace by Toyota. Automotive engineers claim it’s very effective and improves any vehicle’s chassis performance.

Yamaha has been testing and evolving this technology for a couple of years and is making it available on all Apex, Vector and Venture models for MY2015 when you early-order a new sled.

Kent Lester
Kent Lester is Co-Publisher of SUPERTRAX Magazine and a regular contributor to this website.
Previous articleHOW TO GET POWER OUT OF A 4-TEC
Next articleQuebec’s Jewels of the North