Quebec’s Jewels of the North 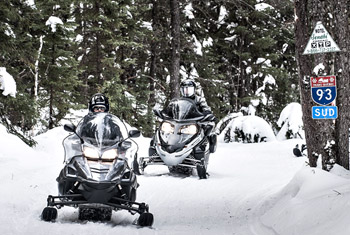 There are many great riding areas in Québec but two of the most memorable are in Northwestern Québec: Abitibi-Témiscamingue and Tourisme Baie-James. Those who’ve experienced the trails in these two regions likely have a permanent smile etched on their faces.

This part of Québec has become one of North America’s premier riding destinations and the simple fact is, it’s all about their great trails! We’ve always been amazed at how the trails never seem overly busy yet, strangely, at the end of the day, every motel is full of sledders.

North of Abitibi, Eeyou-Istchee Baie-James has quietly become a favorite destination for snowmobile enthusiasts addicted to riding big miles. Abitibi has a trail network of 3700 km (2299 miles) linking its towns together. Baie James, has 1100km (683 miles) of awe-inspiring, remote trails where you can ride for hours with no interruptions and just mile after mile of white ribbon rolling out in front of you.

Last winter we were invited back to tour the region during the first week of March and expanded the trip itinerary to make a complete loop tour through several tourism regions : Abitibi-Témiscamingue, Eeyou Istchee Baie-James, Saguenay–Lac-Saint-Jean and Mauricie.

We started our trip in Abitibi from the Hotel in Val-d’Or. As usual, the parking lot was packed with trucks, trailers and snowmobiles were parked everywhere. We awoke to a real fresh -25°C (-13°F) morning (hey, you’re a long ways north) and we pointed our sleds north on Trail 83 with a lunch stop in Senneterre, our overnight in Lebel-sur-Quévillon.

On this trip we were accompanied by Baie James Marketing Director, Anne Nguyen. Anne had minimal snowmobiling experience but in true Québec fashion was quickly riding like she had done it all her life!

On our second day we headed to Chibougamau on Trans Québec Trail 93 on about 6-inches of fresh powder with a lunch and gas stop in Waswanipi. By mid-morning we met a groomer and our ride into Waswanipi was as good as it gets. In late afternoon we rolled into the sled compound at Motel Nordic in Chibougamau and could hardly believe we had ridden over 322 km (200 miles). Along the way we had made numerous stops and met only about a dozen sleds!

Our third day had us heading south again on Trans Québec 93 with Auberge des Berges in Saint-Félicien our night’s destination. On this sunny -15°C (5°F ) day, trails were tabletop but as the day wore on the thermometer started to climb. By the time we reached Saint-Félicien it had warmed to plus -13°C (9°F). It turns out nearby Roberval was the second warmest spot in Canada that day.

At that point we had to make a decision on whether to continue or backtrack through Baie-James. We chose the latter and were glad we did. There’s nothing better than seeing TQ93 going in the opposite direction!

One thing to remember in this northern area is that credit cards are not as commonly accepted as they are in the south. By the last day we were digging through our pockets to find enough cash to buy our lunch.

Both regions offer hundreds of miles of the most scenic, meticulously groomed riding you’ll find anywhere. Cold weather and snow come early here allowing Abitibi-Témiscamingue and Baie-James to fine-tune their trail systems before the traffic arrives.

By the time winter has set in, the trails are smoothly groomed and well set up to handle the out-of-province herds of snowmobilers arriving from the USA and neighboring Ontario. It’s about a 7-hour drive from the US states bordering Ontario and Québec. Most southern Ontario drives would be about five hours or less.

I like to start my ride out of the town of Témiscaming, the most southern tip of these two regions. Also, Rouyn-Noranda is another excellent place to start. Trust me, I’ve never seen a shortage of snow here. On the tail end of the season, I’ve experienced some awesome riding in late March and often into early April. Those who have ridden here know it’s one of snowmobiling’s best-kept secrets. You need to put it on your bucket list.

With over 33,000 km (20,000 miles) of trails to choose from, the decision of which region to ride in Québec is often the most difficult thing about planning a trip here.

Thankfully, for anyone interested in riding this spectacular network of trails, the Québec Tourism website (www.QuebecOriginal.com/snowmobile) is the perfect ambassador to the region. This website is an important tool to use when planning your winter adventure.

With seven regions to choose from, endless touring opportunities await. Whether you’d like to ride through meandering sugar bush trails or witness the majestic views of the Saint Lawrence River, when you ride in Québec you’re always greeted with freshly groomed trails and an unforgettable, warm welcome.

One of our most recent trips to Québec was to the “Authentic” regions of Lanaudiere and Mauricie where we were treated to those districts’ legendary hospitality and beautiful scenery. This trip was showcased in Episode #2 of the 2014 season of SnowTrax Television.