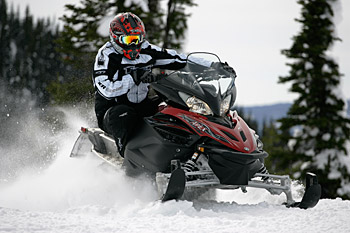 We don’t think the 2011 Apex XTX is what the purist crossover pilot is all about. This doesn’t mean we don’t like the Apex XTX or it isn’t a good sled in its proper place and in its own right. What we see here is a pretty blatant contradiction of the underlying X-Over principle.

With the intro of a 144-inch Apex, the X-Over thing looms large. Yamaha wants this sled to float and hook up in deep snow and we believe that goal has been accomplished – when compared to a 128-inch Apex. However, next to a featherweight X-Over like the Polaris Assault, the Apex XTX’s deep snow performance simply cannot be compared.

So what is the Apex best suited for with its Electric Power Steering, EXUP exhaust valves and trail-friendly ergonomics? Clearly, this ride addresses the other crossover rider, the one we think is the meat of the X-Over market.

The biggest chunk of the crossover marketplace is dominated by buyers looking for more track length to improve flotation and increase traction. In particular, this buyer knows the mogul-bridging effect of extra track length delivers an improved ride on bumpy trails.

For this demographic, the XTX is among the top choices in this comparo. The inclusion of standard EPS on the XTX is without equal in the segment and its benefits are clearly pointed at the trail rider but of little value to the freerider.

The XTX skidframe, somewhat of a disappointment in the lightweight Nytro as a trail-plush suspension, becomes precisely that in the Apex XTX.

Another aspect of the XTX is its weight. While the lighter Nytro equipped with the 144-inch XTX bent-rail skid produced noticeable understeer on trails, the Apex benefits from its undeniably heavier front end, pushing its carbides into the white top and delivering what we felt was predictable initial turn-in and acceptably strong bite through the center of turns.

Throw in EPS, which produces ridiculously easy-to-modulate bar sawing and you’ve got a mount ready for serious trail duty. You’ve also got a ride that’s fully capable when you pull onto a snow covered lake and whack the loud handle.

The 144 meat under the XTX claws capably at fluff, lifting the Apex’s nose allowing for some nice high speed runs through fresh powder on Kevlar Lake. Without a doubt, here is where the Apex XTX is at home.

The Apex XTX is a crossover but not by the purist’s definition. If buyers get this issue sorted out in the showroom, everyone should be happy.

If a boondocking X-Over buyer is predisposed to a 4-stroke and it has to be a Yamaha, there’s only one Yamaha they should consider, the Nytro XTX.

If, on the other hand, a trail riding crossover buyer wants a 4-stroke and it has to be a Yamaha, the Apex XTX is the way to go.